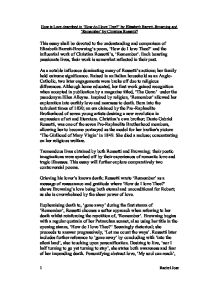 How is Love described in 'How do I love Thee?' by Elizabeth Barrett-Browning and 'Remember' by Christina Rossetti?

How is Love described in 'How do I love Thee?' by Elizabeth Barrett-Browning and 'Remember' by Christina Rossetti? This essay shall be devoted to the understanding and comparison of Elizabeth Barrett-Browning's poem, 'How do I love Thee?' and the influential work of Christina Rossetti's, 'Remember'. Each boasting passionate lives, their work is somewhat reflected in their past. As a notable influence dominating many of Rossetti's actions; her family held extreme significance. Raised in an Italian household as an Anglo-Catholic, two later engagements were broke off due to religious differences. Although home educated, her first work gained recognition when accepted in publication by a magazine titled, 'The Germ' under the pseudonym Ellen Alleyne. Inspired by religion, 'Remember' allowed her exploration into earthly love and nearness to death. Born into the turbulent times of 1830; an era claimed by the Pre-Raphaelite Brotherhood of seven young artists desiring a new revolution in expression of art and literature. Christina's own brother; Dante Gabriel Rossetti, was one of the seven Pre-Raphaelite Brotherhood members, allowing her to become portrayed as the model for her brother's picture 'The Girlhood of Mary Virgin' in 1849. She died a recluse; concentrating on her religious welfare. Tremendous lives obtained by both Rossetti and Browning; their poetic imaginations were sparked off by their experiences of romantic love and tragic illnesses. This essay will further explore comparatively two controversial poems. ...read more.

She is free to love him, 'I love thee freely, as men strive for Right', she desires control of her own life away from her father with marriage. Absent of religion, 'as they turn from praise', she lost her religious beliefs after eloping. Weak to her thoughts, 'For if the darkness and corruption leave,' Rossetti personifies her apology to her possible change of attitude when her illness gains in strength. She seeks his well-being, 'Better than you should forget and smile, than that you should remember and be sad,' preferring her memory to be associated with happiness and passion rather than depression. Browning's final sestet relates to her past over the mentions of her present in her first two quatrains. Her love described as 'passion', appears as of both mental and physical attributes. Having suffered the deaths of her mother and two brothers, 'In my old griefs, and my childhood's faith,' it seems that their shared romantic love rescued her lost religious faith. Believing her relatives have passed to heaven, 'With my lost saints. I love with the breath,' she transferred her admiration from religious saints to her husband. Concluding the last two stanzas with a range of emotion, 'Smiles, tears' similar to Rossetti's 'forget and smile'. Having turned her back on God, Browning apologises, 'If God choose,' hoping that God would forgive her after her prevailing absence regarding her losses. ...read more.

Rossetti follows the rhyming scheme of 'A,B,B,A,A,B,B,A,C,D,D,E,C,E,' whilst Browning chooses 'A,B,B,C,A,B,B,A,D,E,D,E,D,E', each allowing of only five rhyming endings, Rossetti and Browning are concise in their choice of prose. Immersed with extraordinarily unique styles and approaches, the individual method of Browning is of perfection and precise adequacy, as Rossetti is flexible with her usage of structure yet superbly concealing of the delicate issues of death. Burdened with the balance of idyllic emotion and melancholy partings, the tonal attitude adopted by Rossetti and Browning in their poems is brutally blunt with enchanting passion and the intolerance of death explored relentlessly with dramatic outlook. I conclude that Browning is a considerably influential writer with uncommon skill and buoyancy. Her flow and incomparable devices ensure her work to be appreciated for many further generations. This particular piece of recommendable history regarding her life is undoubtedly successful through her prevailing ability to capture the emotion of love. Its success is derived from the basis of which she surrenders the raw feeling of reality with originality and vehemence. As an equal contender of the highest of writers, Rossetti possesses an obvious eye for poetic innovation. She moulds her words to her structure with unbelievable talent and compassion. The success of 'How do I love Thee?' and 'Remember' can only be held to the exquisite splendour of the profound intensity of love. ?? ?? ?? ?? 1 Rachel Jose ...read more.