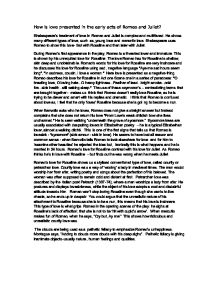 How is love presented in the early acts of Romeo and Juliet?

How is love presented in the early acts of Romeo and Juliet? Shakespeare's treatment of love in Romeo and Juliet is complex and multifaced. He shows many different types of love, such as, young love and romantic love. Shakespeare uses Romeo to show this love- first with Rosaline and then later with Juliet. During Romeo's first appearance in the play, Romeo is a thwarted lover and immature. This is shown by his unrequited love for Rosaline. The love Romeo has for Rosaline is shallow, skin deep and unobtainable. Romeo's words for his love for Rosaline are very insincere and he discusses his love for Rosaline using sad, negative language "Aye me sad hours seem long", "In sadness, cousin, I love a woman." Here love is presented as a negative thing. Romeo describes his love for Rosaline in Act one Scene one in a series of paradoxes: "O brawling love, O loving hate...O heavy lightness...Feather of lead...bright smoke...cold fire...sick health...still waking sleep." The use of these oxymoron's - contradicting terms that are brought together- makes us think that Romeo doesn't really love Rosaline, as he is trying to be clever and smart with his replies and dramatic. I think that Romeo is confused about love as, I feel that he only 'loves' Rosaline because she is going to become a nun. When Benvolio asks who he loves, Romeo does not give a straight answer but instead complains that she does not return his love "From Love's weak childish bow she lives uncharmed." ...read more.

Pathetic fallacy is giving inanimate objects-usually nature, human feelings and qualities. When Romeo is talking to benvolio he is using short smart sentences and rhyming couplets: '...o loving hate...nothing first create.' This makes Romeo's love for Rosaline seem artificial and theatrical. 'The all seeing sun ne'er saw her match since first the world begun'. The sun is personified to be godlike. The sun is looking down on all the women in the world and no one is compared to her, focusing again on her looks, superficiality of Romeo's attachment. There is a contrast with Romeo ad Juliet's emotional love and commitment to each other and references to physical desire making their relationship more convincing, as it means that it is no longer poetry and an unrealistic romance. Mercutio frequently employs crude references that emphasises the physical relationship between the sexes, he says "straight leg and quivering thigh". He lists Rosaline's body parts, to make fun of Romeo, and tries to Romeo realise that he does not love Rosaline but just lusts over her. This contrasts with Romeo's love for Juliet, as their love is pure and innocent. The popularity of the play does not come from different definitions of love, but love in its triumphant description of one love, 'true love'. The 'true love' of Romeo and Juliet that shines out against any other. In Romeo's and Juliet's opening words they share a sonnet. ...read more.

That Romeo and Juliet fell in love at first sight makes their love seem very dramatic and powerful. People have argued that their love is destructive as they are putting each other's lives in danger, and that they wouldn't have died if they hadn't treated love as being the only thing worth living for. In the play Juliet is thirteen. This means that their love may be true but it is also young. Young love is traditionally seen as being headstrong and passionate, not wise or realistic. I feel that Shakespeare made Juliet this young deliberately as this makes her appear to be more vulnerable. This also shows their unconventional relationship to be immature and reckless, but it can also make their actions seem braver. Her age also makes her transformation, from a submissive child about to give into her parent's demands, into a young woman who is prepared to fight and die for the man she loves. During this scene Romeo and Juliet are tense and rushed, as they could get caught at any minute. Also, during this scene there are some intimate and romantic moments. Before Juliet knew that Romeo was listening, her speech was soliloquy. Shakespeare does this as it allows Juliet to speak openly about her true feeling for Romeo. She ends her speech in the middle of the line of blank verse, 'take all myself'. Romeo then completes the line, 'take', as if has accepted her offer. ...read more.