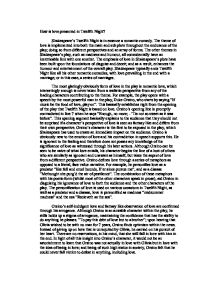 How is love presented in Twelfth Night?

How is love presented in Twelfth Night? Shakespeare's Twelfth Night is in essence a romantic comedy. The theme of love is implemented into both the main and sub plots throughout the endurance of the play; doing so from different perspectives and an array of forms. The other themes in Shakespeare's play, such as madness and humour, all coincidentally have an inextricable link with one another. The emphasis of love in Shakespeare's plots have been built upon the foundations of disguise and deceit; and as a result, enhances the humour and entertainment of the overall play. Shakespeare typically ends Twelfth Night like all his other romantic comedies, with love prevailing in the end with a marriage; or in this case, a series of marriages. The most glaringly obviously form of love in the play is romantic love, which interestingly enough is never taken from a realistic perspective from any of the leading characters contributing to the theme. For example, the play opens with a speech by the most powerful man in the play, Duke Orsino, who starts by saying "If music be the food of love, play on". ...read more.

Orsino's self-indulgent love and fantasy like observation of love are confirmed through his arrogance. Although Orsino is an amiable character within the play, he stills holds up a stigma of arrogance, maintaining the confidence that has the ability to do anything he pleases. "To pay this debt of love but to a brother"; upon hearing that Olivia wished to be with no man for 7 years, Orsino finds optimism within the news. Instead of giving up on love that is unrequited by Olivia, he carried on his pursuit of her heart. There are no reservations, in his mind, that she will fall in love with him in the end. In light of all this insight into Orsino's character, it would not be an astonishment to learn that Orsino was not actually in love with Olivia but in love with the idea of being in love; and being of such high status in society, Orsino felt that he could never fall victim to defeat in anything, including love. Although Olivia does not return Orsino's love, she is also a target of self-love. Olivia persistently talks of her beauty throughout the endurance of the play. ...read more.

Viola's love for Orsino entails the same humour, but the humour intensified by the fact that Viola continuously drops hints to Orsino that Cesario is a woman, in the hope he may recognise her riddles, "I am all the daughters of my father's house, And all the brother's too". The most obvious case of self-love in Twelfth Night came in the form of Malvolio, the dislikeable character of the play. Olivia describes Malvolio of being "sick of self-love". Malvolio is a condescending, self-righteous, puritan type, character. Malvolio is immediately mesmerised with the idea of becoming "Count Orsino" and immediately believes Olivia loves him. However, the driving force behind his feelings for Olivia are clearly for his promotion up the ranks and lust. Malvolio becomes obsessed with the idea of sex when he completely abandons his beliefs as a puritan and aims sexual connotations towards Olivia, "To bed? Ay sweetheart, and I'll come to thee". The whole scheme behind the gulling of Malvolio brings out humour and entertainment; whose self-love brought him down. The romantic love ...read more.