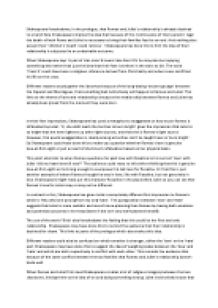 How is love presented throughout Romeo and Juliet ?

﻿Shakespeare foreshadows, in the prologue, that Romeo and Juliet?s relationship is already destined to a harsh fate. Shakespeare implies the idea that because of the ?continuance of their parents? rage? the death of both Rome and Juliet is necessary to bring their families feud to an end. And nothing else except their ?children?s? death ?could remove?. Shakespeare has done this to hint the idea of their relationship is subjected to an undesirable outcome. When Shakespeare says ?A pair of star-cross?d lovers take their life? he may also be implying something else rather than just the idea that their fate is written in the stars to die. The word ?Cross?d? could have been a religious reference derived from Christianity and when Jesus sacrificed his life on the cross. Different readers would gather the idea that because of the long-lasting ?ancient grudge? between the Capulet and Montagues, that something bad instinctively will happen to Romeo and Juliet. This links to the theme of love and relationships because the relationship between Romeo and Juliet has already been jinxed from the moment they were born. In their first impressions, Shakespeare has used a metaphor to exaggerate on how much Romeo is infatuated by Juliet. ...read more.

And then later the audience could feel even sorrier for them as their young and foolishness caused them to die. Shakespeare also presents Romeo to be less patient than Juliet ?O, wilt thou leave me so unsatisfied?. This makes us question whether Romeo?s love yet again is as genuine as Juliet?s, or whether it?s more lust and desire from wanting something physical. During the wedding Shakespeare foreshadows something very bad will happen as he states through Friar Laurence that ?these violent delights have violent ends?. The use of ?violent? in this context is to portray the idea of something that is intense but quick and short-lasting. Shakespeare has clearly done this to evoke the idea that rushing into their relationship out of passion too soon will also finish quickly as well. Shakespeare has also used this dramatic irony as the audience can know guess that something very bad will happen despite Romeo and Juliet still being ignorant to the future events. This piece of text relates back to the prologue where it originally states a ?pair of star-cross?d lovers take their life? which implies that their love is destined for doom. This also links to the theme of love and relationships as Shakespeare presents their love as transient and destructive. ...read more.

So Shakespeare may have done this to remind the audience again about their deaths being necessary. Differently readers would now be at the climax of their thoughts about Romeo and Juliet’s relationship with either pity or admiration. Some would pity them as they were young, foolish and naïve which has ultimately brought them to death. But on the contrary, even admiration as their ‘love’ may have been so powerful it was strong enough for them to both willingly sacrifice themselves for each other. Through these ends scenes Shakespeare presents their love and relationship as something which was traumatic, transient and very sad. At the end of the play, Shakespeare reminds us how unhappy and unfortunate Romeo and Juliet’s relationship was destined for. Shakespeare uses poetic devices such as rhyming to finish it off ‘for never was a story of more woe than this of Juliet and her Romeo’ which leaves the audience with that for their last thoughts about the play. Shakespeare has done this to leave the audience thinking that despite everything about their relationship that may have been impulsive, foolish or naïve it’s still a very tragic unfortunate end for them. This also relates back to the initial prologue ‘death mark’d love’ when it foreshadowed about their death, which reminds us how tragic it is for Romeo and Juliet’s fates is to die. ...read more.