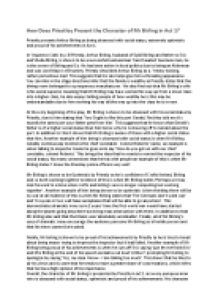 How is Mr Birling Presented in Act 1?

Transfer-Encoding: chunked ﻿How Does Priestley Present the Character of Mr Birling in Act 1? Priestly presents Arthur Birling as being obsessed with social status, extremely optimistic and proud of his achievements in Act 1. In ?Inspector Calls? by J.B Priestly, Arthur Birling, husband of Sybil Birling and father to Eric and Sheila Birling, is shown to be a successful businessman ?hard headed? business man, he is the owner of Birling and Co. He has been active in local politics due to being an Alderman and was Lord Mayor of Brumley. Priestly described Arthur Birling as a, "heavy-looking, rather portentous man? This suggests that his size helps give him a threating appearance. You can Also in the stage directions infer that the family is wealthy as Priestly states that the dining room belonged to a prosperous manufacturer. ...read more.

In addition to this it shows that Mr Birling is aware of those with a higher social status that him. Another example of him being is obsessed with social status is when Mr Birling notably continuously mentions the chief constable - Colonel Roberts? name, an example is when talking to inspector Goole he goes onto say ?How do you get on with our chief constable, colonel Roberts?. This brings the idea that he wants to remind the inspector of his social status, his many connections that he has with people an example of this is when Mr Birling states ?I know the Brumley police officers very well?. Mr Birling is shown to be Optimistic by Priestly as he is confident of Crofts limited, Birling and co both working together evidence of this is when Mr Birling states ?Perhaps we may look forward to a time when crofts and birling?s are no longer competing but working together?. ...read more.

Another example of Mr Birling being proud of his achievements is when he cuts off Eric saying ?just let me finish Eric? and Mrs Birling at the end of his speech exclaims out loud ?Arthur!? prompting Mr birling to apologise by saying ?Yes, my dear I know - I am talking too much?. This shows that he likes to air his views and is ware that he tends to have a greater share of conversations, which infers that he has a high opinion of his importance. Overall, the character of Mr birling is presented by Priestly in act 1 as a very pompous man who is obsessed with social status, optimistic and proud of his achievements. His character is full of negativity and is a quite a contrast to others such as Sheila, Eric and Inspector Goole. ...read more.