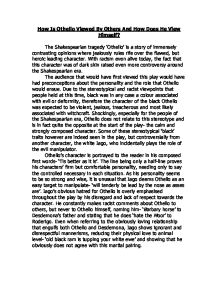 How Is Othello Viewed By Others And How Does He View Himself? The Shakespearian tragedy 'Othello' is a story of immensely contrasting opinions where jealously rules rife over the flawed, but heroic leading character. With racism even alive today, the fact that this character was of dark skin raised even more controversy around the Shakespearian era. The audience that would have first viewed this play would have had preconceptions about the personality and the role that Othello would ensue. Due to the stereotypical and racist viewpoints that people held at this time, black was in any case a colour associated with evil or deformity, therefore the character of the black Othello was expected to be violent, jealous, treacherous and most likely associated with witchcraft. Shockingly, especially for the people of the Shakespearian era, Othello does not relate to this stereotype and is in fact quite the opposite at the start of the play- the calm and strongly composed character. Some of these stereotypical 'black' traits however are indeed seen in the play, but controversially from another character, the white Iago, who incidentally plays the role of the evil manipulator. Othello's character is portrayed to the reader in his composed first words- 'Tis better as it is'. The line being only a half-line proves his characters' firm but comfortable personality, needing only to say the controlled necessary in each situation. As his personality seems to be so strong and wise, it is unusual that Iago deems Othello as an easy target to manipulate- 'will tenderly be lead by the nose as asses are'. Iago's obvious hatred for Othello is overly emphasised throughout the play by his disregard and lack of respect towards the character. He constantly makes racist comments about Othello to others, but never to Othello himself, naming him- 'Barbary horse' to Desdemona's father and stating that he does 'hate the Moor' to Roderigo. ...read more.

She sees through his vicious acts and it is clear to her that the man she married is no longer the corrupted man that stands before her. With her last words to Emilia she states that she doesn't hold Othello responsible for her death, and even at this perilous moment, names her husband well- 'Nobody; I myself. Farewell. Commend me to my kind lord.' She always manages to see Othello positively. Emilia herself, closely linked with Desdemona and often mistreated by her husband Iago, quickly alters her opinion of Othello as the play progresses. Her attitudes towards men are already bitter and derive mainly from the way that Iago has treated her throughout their marriage. She seems to be a feminist and is able to stick up for women- but only in the absence of a male presence. For Emilia the way in which Othello treats Desdemona only emphasises this feeling- 'they eat us hungerly, and when they are full, they belch us.' Unfortunately it is evident that Emilia has not always thought of Othello in this negative manner. She awards him the benefit of the doubt as she recognises that his behaviour is becoming erratic and almost stumbles upon Iago's secret- 'Remove your thought. It doth abuse your bosom. If any wretch have put this in your head, let heaven requite it with the serpent's curse!' Othello's final behaviour allows Emilia to justify her racist statements- 'O, more the angel she, and you the blacker devil!' Othello at his most degrading point in the play reverts to the stereotype that he originally seemed so far from, even though it is apparent to the reader that his reactions are in fact more like Iago's. Emilia's final realisation forces her to make yet another racist comment and name Othello as gullible- 'Oh thou dull moor'. Brabantio's relative, Lodovico, is the character that shows an obvious change in attitudes towards Othello, in a strikingly short space of time. ...read more.

The final stage in Othello's personality transformation sees him return almost to his former self- a controlled man, but this time with a huge sense of guilt and despair laid upon his heart. He now sees himself as a monster, and begs for punishment' 'Whip me... Roast me in sulphur!' In a desperate effort to regain control in the situation, we see Othello commit an act that would fit with his former character, he stabs himself. This shows that Othello now thinks so badly of himself that he claims happiness will be found in death- 'For in my sense 'tis happiness to die.' We see Othello in his final speech attempt to reclaim any respect and decency from his characters, and asks them to remember him as one that 'loved not wisely, but too well' and a man that was -'not easily jealous but, being wrought, perplexed in the extreme'. This shows that Othello has regained control over the final moments of his life and hopes to be remembered not for the tragic deeds he has committed but for his decencies and military service. He views himself as an unfairly mislead man, that inevitably forged his own fate. In conclusion, Othello as a character is not only a controversial, but also travels on such a journey through personalities that he is able to change the opinions of those who once looked up to him. The troubled, aggressive and broken Othello we see at the end of play is a shadow of his former self and proves just how each and every person has strengths and weaknesses that can be carefully manipulated. The real Othello that we see at the beginning of the play is one that can never be regained once jealousy has set in, and this is clearly shown by the tragic ending to the play. Othello tragically saw himself as a strong character, but was eventually shown to be a gullible fool at the hands of the evil manipulative Iago. By Louise Bishop 5GD Form: 112 ...read more.