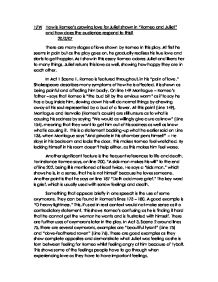 How is Romeo's growing love for Juliet shown in &quot;Romeo and Juliet&quot; and how does the audience respond to this?

H/WHow is Romeo’s growing love for Juliet shown in “Romeo and Juliet” and how does the audience respond to this?20/3/07

There are many stages of love shown by Romeo in this play. At first he seems in pain but as the play goes on, he gradually realises his true love and starts to get happier. As I show in this essay Romeo adores Juliet and likens her to many things. Juliet returns this love as well, showing how happy they are in each other.

In Act 1 Scene 1, Romeo is featured throughout, in his “pain of love.” Shakespeare describes many symptoms of how he is affected. It is shown as being painful and affecting him badly. On line 149 Montague – Romeo’s father – says that Romeo is “the bud bit by the envious worm” as if to say he has a bug inside him, slowing down his will do normal things by chewing away at his soul represented by a bud of a flower. At this point (Line 149), Montague and Benvolio (Romeo’s cousin) are still unsure as to what is causing his sadness by saying “We would as willingly give cure as know” (Line 154), meaning that they want to get him out of his sadness as well as know what is causing it.  This is a statement backing-up what he earlier said on Line 136, when Montague says “And private in his chamber pens himself” – He stays in his bedroom and locks the door. This makes Romeo feel wretched. By locking himself in his room doesn’t help either, as this makes him feel worse.

Another significant feature is the frequent references to life and death. For instance Romeo says, on line 200, “A sick man makes his will” to the end of line 202, being ill is mentioned at least twice. He says a “sick man,” which shows he is, in a sense, that he is not himself because he loves someone. Another point is that he says on line 187 “Doth add more grief.” The key word is grief, which is usually used with sorrow feelings and death.

Something that appears briefly in one speech is the use of some oxymorons. They can be found in Romeo’s lines 173 – 180. A good example is “O heavy lightness.” This, if used in real context would not make sense as it a contradictory statement. This shows Romeo’s confusing as he is finding it hard that he cannot get the woman he wants and is frustrated with himself. There are further uses of oxymorons later in the play. In Act 3, Scene 2 around lines 75, there are several oxymorons, examples are “beautiful tyrant” (Line 75) and “dove-feathered raven” (Line 76). These are good examples as they show complete opposites and demonstrate what Juliet was feeling as she is torn between feeling for Romeo whilst feeling angry at him because of Tybalt. This shows some of the feelings people have to go through when experiencing love as they have to have important feelings.

Images of problems of love are also picked up on. In Romeo’s speech around line 190, he says “Love is a smoke made with the fume of sighs.” This is saying that love is something that will poison you as it ends up with sighs. Shakespeare is making Romeo get out of his state of love and into his normal self. Romeo even says “I have lost myself.” He knows this isn’t like him and needs to snap out of it but Shakespeare cleverly gets Benvolio involved, so Romeo is forced to tell more, making it even harder for Romeo breakout of his frame of mind.

Lastly Romeo and Benvolio mention love and blindness (and the eye) together. In Act 1 Scene 2, Benvolio says “Take thou some new infection to the eye.” This is saying that Benvolio wants Romeo to look at other women to stop him thinking about the one, who has been keeping him secluded. This line could also mean that Benvolio thinks Romeo has been blind in terms of looking at other women and that “a new infection” i.e. an infection means an illness that stops you from seeing, so love is a illness for Romeo. From here could be a turning point in two ways for Romeo. He could start being himself again or looking at other women could make him feel worse as he was in Act 1, Scene 1. Romeo would not want this because he may find it harder to get out of his miserable state a second time round. Also the audience may get impatient as they want to see Romeo progress, not rewind into his former conditions.

We now start to see Romeo open up as he sees Juliet. This is now the beginning of him becoming happier. This is also the first time the audience see Juliet, in the eyes of Romeo, so is a crucial part of the play.

When Romeo firsts sees Juliet, he is truly amazed, and this is shown clearly. In Act 1, Scene 5, Romeo likens her to a “rich jewel in an Ethiop’s ear” (Line 46). This is effective because it gives the audience an image of jewel, which is prominent in the first place, but to be an Ethiopian’s ear, makes it seem all the brighter. This shows that Juliet is already precious, and stood out to him immediately. Another idea to back this up is the use of the word “torches” shortly afterwards. This could also be interpreted as standing out from the other people. I think could also mean that she is his light. This shows contrast from earlier when it was dark to him.

Religion is also used as a theme. On line 94, Romeo says “This holy shrine,” which could show that Romeo sees her now as his religion, or his light, as I said in the previous paragraph. He almost worships her and, the effect given is they are now lifting their love to sacred or purer ground, not just all the bits that people usually associate with love. It is still in the balance though as Juliet hasn’t spoken a word to Romeo yet, everything he has said proves how strong his love is.

Another religious idea is “blushing pilgrims” used by Romeo on line 95. Pilgrims is used because it shows he is ready to make the journey of love with Juliet. The impression is that Romeo is waiting and that he wants to find the true meaning of his “religion.” Shakespeare uses pilgrims cleverly as he makes Romeo more romantic than if he put how Romeo felt bluntly. It makes the audience feel that he deserves Juliet.

Romeo is skilful in the way he gets to kiss Juliet. As I said before he is not blunt. Instead he uses “saints” as his way of wooing Juliet. He is shown to the audience that he is a smooth charmer. He also talks of “sins,” this leads to him challenging Juliet and sort of be against what she should do. This is even more temptation and that is another way of how Romeo managed to get his kiss.

Juliet responds by kissing him back, showing the audience that Romeo has been very clever indeed. She says “You kiss by the book.” This now shows that Juliet has given in and this is where their story starts and the part of the play speeds up a little.  This is proven when Juliet finds out she is in love with a Montague, making it doubly interesting for the audience, so they start to get captivated. For Romeo, this is a complete contrast to how he was earlier in the Act. Earlier in the scene on line 53 he said “I ne’er saw true beauty till this night,” shows that he finally realised he was never in love, just desperate.

From now we realise the full extent of Romeo’s love for Juliet. They both almost worship other and we see how much in Act 2. It is almost like they cannot be separated.

In Act 2, Scene2, the audience knows for sure that Romeo’s love is now true, unlike in Act 1 and is happy. Romeo compares to Juliet and being bright throughout page 89. The most obvious example is on line 3 – “Juliet is the Sun.” This shows that he depends on her just as the Earth depends on the Sun. It gives the effect that he cannot live without her. This is backed from line 15 to line 20. A good example is on line 18 where Romeo says “The brightness of her cheek would shame those stars.”        This shows his true affection for her as she shines out to him more than stars, or she shines out to him more than any other woman. Juliet responds to Romeo in the same sort of pattern, which is brightness. Words such as “bright angel” and heaven are used. I think Shakespeare did this to make sure the audience realised that things have definitely improved for Romeo and that he is now truly in love. Moving away from brightness, Juliet refers to him as “dear perfection,” this shows the feelings between them are shared.

There are strong images used later on the Act. From line 80 to line 84, is a very strong image shown by Romeo. This means that Romeo would travel on a very risky journey to find her. This is again an example of how strong his love has grown for her. Throughout the Act there is a strong presence that Shakespeare is trying to show the contrast of Romeo in Act 1 and Act 2. In Act 1, we hear of Romeo moping saying he is in love, but in Act 2 we now hear he is in love but is lighter and more active than before. I think this is because in Act 1 Romeo could have thought he was in love but was not, so maybe his instinctive reaction was to sulk. Again these lines show a significant contrast to earlier when there were feelings of darkness.

Romeo and Juliet are well and truly glued to each other by now. The love they have shown towards each other and is overwhelming. To them they will feel that nothing will tear them apart despite being Capulet and Montague. Their love will rise to unimaginable heights but the audience can tell that Shakespeare will add a cruel twist where something will happen to bring them apart.