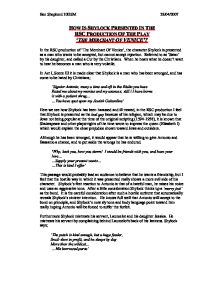 How Is Shylock Presented In The RSC Production Of The Play 'The Merchant Of Venice'?

HOW IS SHYLOCK PRESENTED IN THE RSC PRODUCTION OF THE PLAY 'THE MERCHANT OF VENICE'? In the RSC production of 'The Merchant Of Venice', the character Shylock is presented as a man who wants to be accepted, but cannot accept rejection. Referred to as 'Satan' by his daughter, and called a Cur by the Christians. When he hears what he doesn't want to hear he becomes a man who is very volatile. In Act I, Scene III it is made clear that Shylock is a man who has been wronged, and has come to be hated by Christians; 'Signior Antonio, many a time and oft in the Rialto you have Rated me about my monies and my usances; still l I have borne it with a patient shrug... ...You have spat upon my Jewish Gabardine' Here we see how Shylock has been harassed and ill treated, in the RSC production I feel that Shylock is presented as the bad guy because of his religion, which may be due to Jews not being popular at the time of the original scripting (1594-1958), it is known that Shakespeare and other playwrights of the time wrote to impress the queen (Elizabeth I) ...read more.

I do not bid thee call.' Shylock judges this man because of his poverty and because he is socially beneath him. This shows Shylock as a prejudiced and a selfish man, who wants to pass his stereotypical views onto his daughter by 'guarding' her from the Christian beliefs and believers. 'Lock up my doors; and when you hear the drum... ...Nor thrust your head into the public street to gaze on Christian fools ...' Although it may seem instinctive to fear for one's kin, I felt it shows Shylock as someone who is narrow minded, and not willing to even let his family hear the 'Christian music', the productions choice of body language and tone at this point made me feel that he wanted her to share his hatred, and wanted her to support him in his spite. Another of Shylock's negative attributes made clear in the production is his greed. 'My daughter! O my ducats! O my daughter! Fled with a Christian! O my Christian ducats... ...read more.

This could be described as un-Christian behaviour, which is quite possibly what Shakespeare, and consequently the RSC set out to achieve. Throughout the RSC production I felt, as an audience, that Shylock was presented as an un-Christian character, to the extent that he is wicked. I believe the reason he is treated as different and people are prejudiced, and racist toward him is because he is a Jew. As was true in the Shakespearian period, Jews were unpopular, and seen as greedy, and corrupt - misbelievers. To some extent I feel that the modern audience was also racist toward him, this was when Shylock was stripped of his possessions and forced to give up his religion. The audience laughed at this, which I felt was shocking, although this man had mistreated others I felt he did not deserve this, and did not deserved to be mocked for his losses. I feel that the message of the play was an anti-Jewish message, the play is a dark-comedy, and it would seem that Shylock provided the darkness, and comedy through his being mocked, and his having to lose his faith. Ben Shepherd 10DSM 28/04/2007 ...read more.