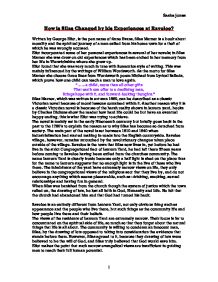 How is Silas Changed by his Experiences at Raveloe

How is Silas Changed by his Experiences at Raveloe? Written by George Eliot, is the pen name of Anne Evans, Silas Marner is a book about morality and the spiritual journey of a man exiled from his home town for a theft of which he was wrongly accused. Eliot incorporated some of her personal experiences in several of her novels; in Silas Marner she was drew on old experiences which has been etched in her memory from her life in Warwickshire where she grew up. Eliot found that she was very much in tune with Romantics style of writing. This was mainly influenced by the writings of William Wordsworth. As the motto for Silas Marner she choose three lines from Wordsworth poem Michael from Lyrical Ballads, which prove how one child can teach a man to love again. "......a child, more than all other gifts That earth can offer to a declining man, Brings hope with it, and forward-looking thoughts." Silas Marner, which was written in autumn 1860, can be described as a classic Victorian novel because of moral lessons contained within it. Another reason why it is a classic Victorian novel is because of the harsh reality shown in lantern yard, books by Charles Dickens show the reader how hard life could be but have an eventual happy ending, this is what Eliot was trying to achieve. ...read more.

wealth, but it isn't that strange because the gold has replaced his God, thus it's the only thing he can focus on in life. Silas collects the money with the same fervour that once drew him to his old religion; he enjoys the feel and look of it more than the actual value. Silas keeps his money under a brick in a hole in the floor; this is ironic because the villagers all know each other business so robberies were a rare thing. When Silas's money is stolen by the corrupted Dunsey Cass, Silas is devastated by his loss, this is the second time something he held dearly has been taken away from him; first of all it was his faith in God and mankind and now his 'faith in money' has been taken away from him. Silas's despair precipitates him to seek the help of the town's people by rushing to the rainbow in a distraught state of mind. However, he is considered an antisocial miser by the people of Raveloe because he barely spends his money not even on himself; it is seen as an irregularity that he should show up at the Rainbow Inn asking for the help of the villagers. "Yet the next moment there seemed to be some evidence that ghosts had a more condescending disposition than Mr. ...read more.

The turning point in the novel when Silas first properly interacted with the people of Raveloe when his gold coins were stolen, but soon after the theft seem irrelevant because he had began to discover happiness with a new type of gold which found its way into his life, Eppie. Through Eppie, Silas was brought back to society and gained some life-long friends and happiness. The novel can be described as a didactic one because there are many things which Eliot focuses on, not the least being a life which is with the noblest of intentions and in turn is rewarded by God. Eliot believed that by living a truly moral life is mankind's ultimate goal on earth.Eliot felt that it was important to get a contrast between the two different social classes, rich and poor, she felt that the poor people who worked for a living were modest and morally good people and that the rich who never had to work to survive were not. Silas Marner progresses through the story and realizes that when he lets go of the materialistic things that dominated his life, and learned to love another human and trust in them again he became a better human being because of it. ?? ?? ?? ?? Sasha jones 1 ...read more.