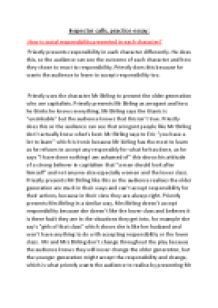 How is social responsibility presented in each character of &quot;An Inspector Calls&quot;?

Transfer-Encoding: chunked ﻿Inspector calls, practice essay: How is social responsibility presented in each character? Priestly presents responsibility in each character differently. He does this, so the audience can see the outcome of each character and how they chose to react to responsibility, Priestly does this because he wants the audience to learn to accept responsibility too. Priestly uses the character Mr Birling to present the older generation who are capitalists. Priestly presents Mr Birling as arrogant and how he thinks he knows everything, Mr Birling says the titanic is ?unsinkable? but the audience knows that this isn?t true. Priestly does this so the audience can see that arrogant people like Mr Birling don?t actually know what?s best. Mr Birling says to Eric ?you have a lot to learn? which is Ironic because Mr birling has the most to learn as he refuses to accept any responsibly for what he has done, as he says ?I have done nothing I am ashamed of? this shows his attitude of a strong believer in capitalism that ?a man should look after himself? and not anyone else especially women and the lower class. ...read more.

Priestly uses the character Eric to present a young capitalist changing into a socialist. Although Eric is not as intelligent as Shelia in the end he finally gets it and accepts what he has done and has learnt from his mistakes. Priestly uses Eric to relate to the audience to follow others as once Sheila started to question her parents and decide they were wrong, Eric gains the confidence to join and shows how socialism is the better option in society. The audience sees Eric?s change, from the start we can automatically tell he is very different to his father and questions his father by saying ?why shouldn?t they ask for higher wages?? we can see already he is starting to feel sorry for lower class women. With the help of Shelia, he changes his attitude from seeing women as ?a good sport? to accepting responsibility for his actions and what he did to make Eva commit suicide. Like Sheila at the end he questions his parents saying, ?you don?t understand none of you do? Priestly does this to shows the younger generation can bring about change and although the older generation might not agree or like the idea it is the better option. ...read more.

The inspector say?s ?there are millions and millions of Eva Smiths and John Smiths? to get the family to realise if they make a change now and accept the responsibility they can help others in the future, however Gerald, Mr and Mrs Birling don?t agree. Just before the inspector leaves he say?s ?If men will not learn that lesson they will be taught it in blood and anguish? This could be the inspector foreshadowing that a war will come and bring about change, as to Mr Birling said at the start ?the Germans don?t want war? but only a few years later there was a war. The quote shows that those who don?t change with the younger generations and don?t accept reasonability will suffer consequences. In conclusion each character has an important role in presenting responsibility, Priestly does this to possibly warn the audience what the future holds for you if you are a capitalist, or a socialist and that it is not to late to change, but if you refuse you will be punished. ...read more.