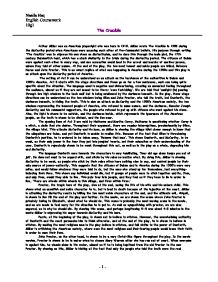 How is Tension Built in The Crucible in Act 3

The Crucible Arthur Miller was an American playwright who was born in 1915. Miller wrote The Crucible in 1953 during the McCarthy period when Americans were accusing each other of Pro-Communist beliefs. His purpose through writing 'The Crucible' was to express his own views on McCarthyism, and he does this through the main plot, the 17th century Salemwitch hunt, which has a stark similarity to the trials during the McCarthy period. The citizens of Salem were against each other in every way, and one accusation would lead to the arrest and murder of another person, unless they told of other names. At the end of the play, the two most honest and noble people are killed, Rebecca Nurse and John Proctor. This is an exact replica of what was happening in America during the 1950s and this play is an attack upon the McCarthy period of America. The setting of Act 3 can be understood as an attack on the harshness of the authorities in Salem and 1950's America. Act 3 starts with the stage directions and these go on for a few sentences, each one being quite specific about the situation. The language used is negative and disheartening, creating an unwanted feeling throughout the audience, almost as if they are not meant to be there; 'even forbidding'. We are told that 'sunlight (is) pouring through two high windows in the back wall' but is being swallowed by the darkness beneath. ...read more.

Parris, at the beginning of the play, is shown not to believe in witches. However, the overwhelming authority of Danforth and the court persuades him to think otherwise, and at the end of the play, he is shown to believe in witches. By making the most religious man in the play believe in witches, and fall victim to the power of Danforth, Miller is criticising the American society, where even the most religious and God-fearing people would leave their faith in order to save their lives. John Proctor, on the other hand, is shown to be a very Christ-like figure throughout the play. In the movie version, Proctor is shown to be in water when he chases Mary Warren after she has run out of court. When everyone is against him, he stands alone in the water, almost as if he is being baptised from the old Proctor to the new Proctor. By showing us this, Miller is hinting at the fact that only the people who told the truth were the real 'gods'; as Jesus Christ is believed to be in Christianity, and the others were just liars, who sacrificed their friends, or in Salem's case, their enemies, in order to save themselves. At first meeting, we think that Hale is McCarthy, as he appears to be very self-confident and arrogant; " they are weighted with authority". However, as we read further into the play, Hale seems to change, and realises the stupidity and injustice in the system. ...read more.

Proctor's damning lines at the end of the play suggest that there were some good people in Salem and in America during the 1950's-people who would give their lives for their loved ones. In the movie, Proctor is shown to be reciting the God's Prayer just before being hanged, and it was believed that witches were not able to recite the God's Prayer. By showing him do this, Miller is showing everyone how blatant it was that the innocent were dying, and he criticises the citizens of Salem for not realising this, in other words, he is criticising the American society. This has a negative effect on the audience, as they appreciate the injustice of McCarthy, and how the people were not doing anything to save anyone. Having considered the dramatic nature of this scene, I believe that it criticises McCarthyism and is an attack on the American society of the 1950's. Miller does this by repeatedly showing the Salem citizens as ignorant and unintelligent. He attacks Danforth time and time again, showing him to be weak, and yet he is able to have power over the people, only because of the fact that he has higher authority then they have. The innocent characters are the ones who are killed, and the guilty characters are the ones who get away with their crimes. This highlights the very point that during 1950's America, there was no justice whatsoever, and the only people who ruled were those who were of a higher rank than the normal citizens. ?? ?? ?? ?? Naaila Haq English Coursework 10g1 - 1 - ...read more.