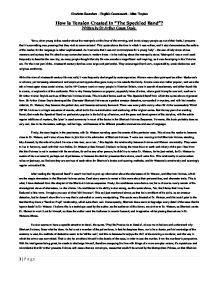 How Is Tension Created In The Speckled Band?

How Is Tension Created In "The Speckled Band"? Written by Sir Arthur Conan Doyle. "Now, when young ladies wander about the metropolis at this hour of the morning, and knock sleepy people up out of their beds, I presume that it is something very pressing that they wish to communicate". This quote shows the time in which it was written, and it also demonstrates the calibre of the reader, for the language is rather sophisticated. As it remarks that it was not commonplace for a young 'lady' - the use of lady alone shows manners and curtsey that I'm afraid to say somewhat lacks in modern times - to be walking about the metropolis alone. 'Metropolis' was a word used frequently to describe the new city, as many people thought that city life was somehow magnificent and inspiring, as it was developing in the Victorian era. For the most part of the, nineteenth century families were large and patriarchal. They encouraged hard work, respectability, social deference and religious conformity. While this view of nineteenth century life was valid, it was frequently challenged by contemporaries. Women were often portrayed as either Madonna's or whores; yet increasing educational and employment opportunities gave many a role outside the family. Novels were also rather popular, and were the talk of most upper class social circles. As the 19th Century went on many people in Victorian Britain, were in search of excitement, and either found this in novels, or exploration of the continents. This is why literacy became so popular, especially tales of crime, where good triumphs over evil; such as in Sir Arthur Conon Doyle's serious of Sherlock Holmes Novels. This included books such as 'The Speckled Band' from which the quote above originated from. Sir Arthur Conan Doyle developed the Character Sherlock Holmes as a perfect amateur detective, surrounded in mystery, and with his loveable sidekick, Dr. ...read more.

His improper entrance also shows that he is controlling, and does not like to be betrayed, but this oath like behaviour, when not responded to as desired, leads him to be calculative when forced, by his inescapable greed, to kill off his step-daughters for their small fortune. He succeeds in killing one, but Helen, the remaining step-daughter notifies Sherlock Holmes, just as a whistle arouses suspicion that she may meet the same fate as her sister. This introductive description of Miss. Helen Stoner, "A Lady dressed in Black, and Heavily Veiled", leads me to believe that she is in a period of mourning, due to the recent events that have torn her family apart, which of course led to her hurried arrival in London, at Sherlock's Door. It also shows that she does not want to be recognized, as I think she feels she is betraying her stepfather, Dr. Roylott, for she has doubts regarding his sanity. When describing the nature of her Stepfather, she also tells of how his behavior is somewhat confusing, for he is away for long periods of time travelling, with the gypsies that 'have set up a camp' on the land. In Victorian times, people of his and their family's caliber were not often comfortably associated with 'vagabonds'. However, she is putting emphasize on the gypsies, this could be an attempt to mask her own guilt, and push Sherlock onto the wrong path of enquiries. But what motive does Helen have? She described how her sister and she were very close, and how her older sister Julie, was engaged to be married shortly, and consequently marriage means having to leave the family home, and herself, alone with the psychotic step-father. This could provide enough motives to substantiate Helen being a possible murderer, for she could be framing her step-father, who she knew would be the perfect candidate for her to pin the blame upon. ...read more.

The pace and development of the scenes, and new discoveries made by the dynamic duo pay a very important part in the creation of tension in the speckled band, each experience, and use of language infers and exposes a new angle from which the murderer could appear. All in all, uses of sentences such as this one, "Far away we could hear the dark tones of the parish clock.. Which boomed out" certainly add mystery and blur the separation between reality and fiction, for I could imagine, and empathise with someone who was reading this in the dead of night, in inner city London, for it certainly does scare you. Another sentence to enforce this feeling of tension is, "the Gathering darkness". This also displays a technique called personification, for the author has grouped the darkness, possibly representing what the darkness can hide, and of course only things of an evil nature are associated with the 'dark', and the 'darkness'. So after studying in depth, the characters, behaviour, context, settings, red herrings, techniques, pace and development, it's fair to say I've looked at all the possible causes for creation of tension. The duo of Sherlock and Holmes only mellow throughout the series, it's the additional characters and new settings, I feel, that make the largest addition to tension. The possibilities are endless, and then using such a stereotypical villain and heroine in this book, lots of red herrings are needed to interest the reader, this need is met fully, and conclusion is somewhat surprising as it takes a lot of knowledge, such as the remarkable abilities that Holmes posses in order to fit the pieces in this jig-saw puzzle. My analytical opinion is that this book has achieved so much, due to its open planned story line, and ability to allow the reader to input his/her own ideas, and this of course is what made it such a point for arguments, and discussions on the Victorian era. ?? ?? ?? ?? Charlotte Saunders - English Coursework - Miss Traylen 1 | Page ...read more.