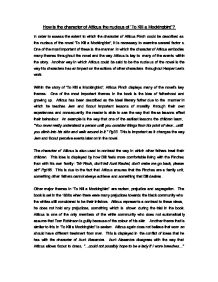 How is the character of Atticus the nucleus of 'To Kill a Mockingbird'? In order to assess the extent to which the character of Atticus Finch could be described as the nucleus of the novel 'To Kill a Mockingbird', it is necessary to examine several factors. One of the most important of these is the manner in which the character of Atticus embodies many themes throughout the novel and the way Atticus is key to many of the events within the story. Another way in which Atticus could be said to be the nucleus of the novel is the way his characters has an impact on the actions of other characters throughout Harper Lee's work. Within the story of 'To Kill a Mockingbird', Atticus Finch displays many of the novel's key themes. One of the most important themes in the book is the idea of fatherhood and growing up. Atticus has been described as the ideal literary father due to the manner in which he teaches Jem and Scout important lessons of morality through their own experiences and consequently the reader is able to see the way that these lessons affect their behaviour. An example is the way that one of the earliest lessons the children learn, "You never really understand a person until you consider things from his point of view...until you climb into his skin and walk around in it." Pg33. This is important as it changes the way Jem and Scout perceive events later on in the novel. ...read more.

As 'To Kill a Mockingbird' is told from the point of view of Scout, who is still young, Atticus is required to explain to Jem and Scout the prejudices in their community. Towards the beginning of the novel the story is based upon a series of lessons that Jem and Scout learn from their childhood experiences. The way Atticus teaches them about morality prepares them for the trial later on in the book. If Atticus was not there to bring the characters and reader through these problems, then the trial would not have the same impact that it does. Atticus could also be described as the nucleus of the novel because of his ability to change other character's views, and his ability to influence people's actions. This is illustrated by how Atticus influences the jury in the court case. Although the eventual verdict of the jury is guilty, Atticus may have helped to dispel some of the original prejudices against Tom Robinson because he was black, therefore slowing the jury in their conviction of Tom. This occurred due to the fact that Atticus managed to prove that the Ewells, who are members of the white community, may not be telling the truth. Therefore the jury began to see that they possibly could not simply judge someone by their appearance. The quote "...he's the only man in these parts who can keep a jury out so long in a case like that." ...read more.

The way that Atticus behaves with the 'mockingbirds' in this story enforces the message that Harper Lee is trying to get across. The character of Atticus spends much of his time in the novel protecting Tom Robinson, one the story's 'mockingbirds'. Another 'mockingbird' in the plot is Boo Radley and Atticus reacts angrily when he discovers that Jem and Scout have been playing a game that ridicules Boo. Atticus believes that it would be kinder for people to just leave Boo Radley alone. In conclusion there are many reasons why the character of Atticus Finch may be perceived as the nucleus of the novel 'To Kill a Mockingbird'. The character embodies many of the key themes from the plot including the theme of fatherhood and the contrast he shows against other individuals concerning the theme of racism. The character of Atticus is integral to the plot of 'To Kill a Mockingbird' because his character can influence those around him, either by changing their way of thinking or due to the fact he is a foil character to Bob Ewell. Atticus could be seen as the novel's nucleus because of how he is often used by the author to contribute to the many messages the book delivers such as not convicting those who are innocent and the message of equality. In conclusion without the many facets of the character of Atticus Finch the story of 'To Kill a Mockingbird' could not be told as effectively as it has been done. Luke Atkins English 10BACL ...read more.