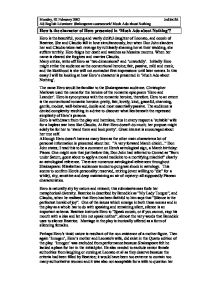 How is the character of Hero presented in 'Much Adoabout Nothing'?

Monday, 02 February 2002 Jad Salfiti AS English Literature: Shakespeare coursework/ Much Ado about Nothing How is the character of Hero presented in 'Much Ado about Nothing'? Hero is the beautiful, young and vastly dutiful daughter of Leonato, and cousin of Beatrice. She and Claudio fall in love simultaneously, but when Don John slanders her and Claudio takes rash revenge by ruthlessly shaming her at their wedding, she suffers terribly. Hero feigns her death and watches as Messina mourns. When her name is cleared she forgives and marries Claudio. Many critics, write off Hero as 'two dimensional' and 'unworldly'. Initially Hero might strike the audience as the conventional heroine; fair, passive, mild and meek, and the likelihood is she will not contradict first impressions until later scenes. In this essay I will be looking at how Hero's character is presented in 'Much Ado about Nothing'. The name Hero would be familiar to the Shakespearean audience. Christopher Marlowe used the name for the heroine of the romantic epic poem 'Hero and Leander'. Hero is synonymous with the romantic heroine, therefore. Hero to an extent is the conventional romantic heroine: pretty, fair, lovely, kind, graceful, charming, gentle, modest, well-behaved, docile and most essentially passive. The audience is denied complexity resulting in a drive to discover what lies beneath the repressed simplicity of Hero's persona. Hero is withdrawn from the play and harmless, thus in every respect a 'suitable' wife for a hapless war hero like Claudio. ...read more.

However, both Hero and Claudio have more in common than meets the eye. Claudio, like Hero, shares the same mentality of staying virtually mute in the presence of the opposite sex. On the other hand Hero might be aware of her role as the manipulator of the situation and the unsuspected dominator of Claudio. Hero may be termed a 'submissive' heroine but she is the universal object of affection: Leonato's, Claudio's, Beatrice's and is therefore mentioned in each and every scene. Despite the fact Hero speaks little in the play she has a degree of control; Hero is the backbone and core of if not the play, most defiantly the plot. Hero is periodically victimized in the play, without ever expressing emotions of rage at the injustices heaped on her. In fact, she is forgiving of Claudio "One Hero died defiled, but I do live, And surely as I live, I am a maid." Hero asks no apology of Claudio for the things he has said to and about her. For a modern audience the 'crimes' committed by Claudio without a doubt require a great act of forgiveness but I feel that forgiveness is of great importance in the play. For an Elizabethan audience the love of man for woman, but not of woman for man, is seen as too frail an emotion to sustain the burdens that are frequently put upon it. Man's love fails and woman must benevolently forgive the failure. ...read more.

Hero follows the cultural norm of the obedient child but finds her voice, once she is no longer under her father's responsibility. Therefore, I am forced to consider Hero as an individual to an extent, hindered rather than helped by her father's dominance. Hero's lack of power is re-enforced following Leonato's extreme and irrational out burst: when Hero is accused at the altar of being unfaithful, she is so timid she does not even press her truth and faints to the ground. Hero's lack of power is further re-enforced by the way the others take control after the disaster and invent the death subterfuge. Even at the point of her unmasking Hero is acting under the direction of others. Shakespeare uses Hero as a device to heighten the drama of her accused dishonour. Modern audiences typecast Hero as the vacuous trophy wife. I believe Hero is anything but 'two dimensional' and 'unworldly'. Hero is the unconventional conventional heroine; cunning and astute if fair, passive, mild and meek on the exterior. Shakespeare has clearly set out to emphasise Beatrice and Benedick as the people's couple, playing down the apparently 'wet' Hero and Claudio, and Beatrice as the overall more real, raw and likeable female character, one must not, however, waive Hero's relevance to the plot for without her it would surely be non-existent. In my opinion Hero becomes and is the play; through a fake resurrection, Hero dies to live, the tragic chasm is bridged to achieve an aesthetically pleasing happy ending. Hero is the silent female character who ultimately speaks volumes. ** Hays, Janice. "Those 'soft and delicate desires' Much Ado and the Distrust of Women." ...read more.