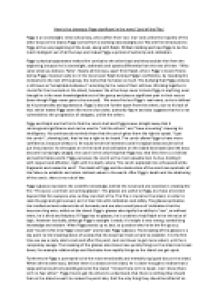 How is the character Piggy significant in the novel, Lord of the Flies?

﻿How is the character Piggy significant in the novel ?Lord of the Flies? Piggy is an overweight, timid school boy, who suffers from ?ass- mar? and unlike the majority of the other boys on the island; Piggy comes from a working class background. We are first introduced to Piggy at the very beginning of the book, along with Ralph. William Golding portrays Piggy to be the most intelligent out of all the boys and makes Piggy a symbol of authority and civilization. Piggy?s physical appearance makes him comical to the other boys and they exclude him from the beginning, because he is overweight, asthmatic and speaks differently from the rest of them. ?Who cares what you believe- Fatty?. Nearly all the boys, apart from Ralph, who is Piggy?s closest friend, betray Piggy, however early on in the novel even Ralph betrays Piggy?s confidence, by revealing his nickname to the rest of the group; the name that he hates so much. The bullying that Piggy endures is still seen as ?acceptable behaviour? according to the rules of their old lives .Working together is crucial for their survival on the island, however the other boys never include Piggy ...read more.

Piggy perceives the conch as the most valuable item he has, holding it with respect and affection, right until his death, where ?the conch exploded into a thousand white fragments and ceased to exist?. The death of Piggy and the destruction of the conch are symbolic of the failure to establish and retain civilised values in the world. After Piggy?s death and the shattering of the conch, there is no rule of law. Piggy?s glasses represent the scientific knowledge, behind the novel and are essential in creating the fire. ?His specs- use them as burning glasses?. The glasses are useful to Piggy, but have a function beyond that for everyone else, as they can start a fire. The fire is crucial on the island, in order to cook the pigs and get rescued, as it is their link with civilisation and safety. The glasses symbolise the intellectual and ordered side of humanity and are also a small piece of civilisation that the boys can cling onto, whilst on the island. Piggy?s glasses also signify the ability to ?see?, as without them, he is blind and helpless. ...read more.

?I know there isn?t no beast...but I know there isn?t no fear either?. Piggy tries to get the others to understand, that there is nothing they should fear on the island as well. He makes the point also, that the only thing they should be afraid of on the island, is the boys themselves. Piggy is also seen as the adult figure of the group, especially to the ?littluns?, because he is far bigger than them and they have no other authoritative figure. He never joins in with the other boys? games and he says the boys are like a ?crowd of kids?, when they go rushing off to light a fire. Golding describes him going after them with the ?martyred expression of a parent?. Overall, Piggy carries immense importance to ?Lord of the Flies? because without him, William Golding?s novel would not have been as effective. Piggy is responsible for the two main symbols in the book- the glasses and the conch, which both establish a link to civilization, which Piggy longs for. His personality is similar at the beginning of the novel, right until his death and he becomes the voice of reason, on an island full of savages. ...read more.