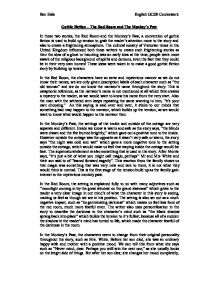 How is the convention of gothic fiction used to build tension in &quot;The Red Room&quot; and &quot;Monkey's Paw&quot;

Gothic Fiction – The Red Room and The Monkey’s Paw

In these two stories, the Red Room and the Monkey’s Paw, a convention of gothic fiction is used to build up tension to grab the reader’s attention more to the story and also to create a frightening atmosphere. The cultural society of Victorian times in the United Kingdom influenced both these writers to create such frightening stories as then the idea of a ghost or haunting was an early idea at the time, people were more aware of the religious background of spirits and demons, even the fact that they could be in their very own homes! These ideas were taken in to make a good gothic fiction story by building up tension.

In the Red Room, the characters have an eerie and mysterious manner as we do not know their names, we are only given description labels of each character such as “the old woman” and we do not know the narrator’s name throughout the story. This is cataphoric reference, as the narrator’s name is not mentioned at all which first creates a mystery to the reader, as we would want to know his name from the very start. Also the man with the withered arm keeps repeating the same warning to him, “it’s your own choosing.”  As this saying is said over and over, it sticks to our minds that something bad may happen to the narrator, which builds up the tension, as we would want to know what would happen to the narrator then.

In the Monkey’s Paw, the settings of the inside and outside of the cottage are very separate and different. Inside we know is warm and safe as the story says, “the blinds were drawn and the fire burned brightly,” which gave out a positive tone to the inside. However outside the cottage was the opposite as it wasn’t very safe or warm, the story says “the night was cold and wet” which gave a more negative tone to the setting outside the cottage, which would make us feel that staying inside the cottage would be best. The supernatural element is also something that is used in the story. After Morris says, “it’s just a bit of what you might call magic, perhaps” Mr and Mrs White and their son said to of “leaned forward eagerly”. This reaction from the family shows us that magic was something that was very new and rare to them, it is not what they would think is normal. This is the first stage of the tension build up as the family gain interest to the mysterious monkey paw.

In the Red Room, the setting is explained fully to us with many adjectives such as “moonlight coming in by the great window on the grand staircase” which gives to the reader a very clear image in our mind’s of what the character in this story is seeing, making us feel as though we are in his position. The setting is also set out as a much negative impact, such as “its germinating darkness” which makes us feel less fond of the red room, much more fearful even. The writer also uses personification in the story to describe the darkness in the character’s mind such as “the black shadow sprang back into place” which builds the tension to it’s fullest, because all of a sudden the shadow in the reader’s mind has turned to life, which made the character fearful of the darkness in the room.

In the Monkey’s Paw, the characters seem to change from their original personality throughout the story, such as Mrs. White. Before her son died, she was an ordinary happy wife and mother with a positive mood. We can tell this from what she says such as “Never mind, dear. Perhaps you will win the next one,” as she usually looks on the bright side of things. But after her son dies; she changes her mood completely, from a happy mother to a sad old woman. The frightening aspect about her is that she still tries to look for a bright side and hope, but in a maddening sort of way, we can tell as she has said to of “cried and laughed together” which is a very unusual emotion to let out, and she also says “wish our boy alive again” which is almost a crazy thought to think of, as we can clearly see here, this is not the same Mrs. White we see at the beginning of the story, as wishing for someone to come back alive from the dead is very unnatural and haunting, thus creating much more tension to the end, to see if this actually happens.

The only supernatural element we seem to see in the Red Room story is the scene when the candles seem to go out by themselves as we can see from this man’s prospective, as the narrator says “I saw the candle in the right scone of one of the mirrors wink and go right out.” This seems to us supernatural, as candles cannot go out by themselves without being blown out. Therefore we may think that the candle must have been blown out by someone invisible, a ghost even. This creates tension to the reader as it is the first proof that the ghost could of actually been in the Red Room.

In the Monkey’s Paw, the warning that we see is the history of the monkey’s paw        and what it has done before, when Morris mentions about the first man who made his three wishes, he replies, “I don’t know what the first two were, but the third was for death,” which shows us a very mysterious background behind the monkey’s paw, making us think how the first two wishes could make this person wish to kill himself. This history is a clear warning that death can be involved with the monkey’s paw, giving us a negative and frightful impact of it, building up tension as this monkey’s paw is now given to this family, we can just tell that something bad may happen to them.

The message that we found in the Red Room story is when the man says “fear” is what haunts the room. Even though we thought a ghost or spirit was in the room, there really wasn’t any ghost at all, the ghost was only there in the narrator’s own imagination. He could imagine that the ghost was with him in the room, but in reality there wasn’t, just the fear of the dark setting of the room. This message shows that our own minds can play tricks on us.

The message in the Monkey’s Paw was said near the beginning of the story, when Morris mentions about the holy man who created the monkey’s paw, “he wanted to show that fate ruled over people’s lives.” From the family’s first wish, we saw this caused death of their son, and a drastic change to Mrs. White, we can see that these wishes that they desired so much changed their lives for the worse, showing the holy man’s message was correct, that their own fate did rule over their lives.