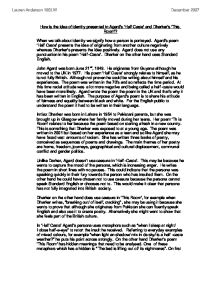 How is the idea of identity presented in Agard's 'Half Caste' and Dharker's 'This Room'?

How is the idea of identity presented in Agard's 'Half Caste' and Dharker's 'This Room'? When we talk about identity we signify how a person is portrayed. Agard's poem 'Half Caste' presents the idea of originating from another culture negatively whereas Dharker's presents the idea positively. Agard does not use any punctuation in his poem 'Half-Caste'. Dharker on the other hand uses Standard English. John Agard was born June 21st, 1949. He originates from Guyana although he moved to the UK in 1977. His poem 'Half Caste' strongly relates to himself, as he is not fully British. Although not proven he could be writing about himself and his experiences. The poem was written in the 70's and so reflects the time period. At this time racial attitude was a lot more negative and being called a half-caste would have been more likely. Agard wrote the poem the poem in the UK and that's why it has been written in English. The purpose of Agard's poem is to share his attitude of fairness and equality between black and white. For the English public to understand the poem it had to be written in their language. ...read more.

The short lines which are used through out the poem could represent the fact that he is half caste and that in some peoples minds he only deserves to write in half sentences. In 'This Room' Enjambment is also used however as I mentioned earlier for different reasons. Dharker's poem does not contain anger and so the enjambment cannot portray this. She may use the device simply to highlight parts of the poem. An example of this is when Dharker writes, "The bed is lifting out of/ its nightmares". The word "nightmares" is highlighted which hints that there used to be severe problems possibly from Dharker's origins. Perhaps she uses it to demonstrate that the physical changes are happening right at that moment and so she has to wait before she is able to report what else has taken place. When it is written "in celebration, clang/ past the crowd of garlic, onions, spices" there is enjambment before "past the crowd..." The persona may have waited before they were able to tell the reader about the new position of the pots and pans. Neither 'Half Caste' nor 'This Room' contains rhyme. ...read more.

Another difference is that 'This Room' is joyful and open to change while 'Half-Caste' is based on anger. I think identity is a main focus of both poems however there are some other themes, which take precedence. In 'Half-Caste one of these themes is a plea for tolerance. Agard's persona wants to feel that they belong to British society and that's why they have tried to defend themselves against the insult of half-caste. Another possible theme is art. The poem makes two references to art. One being "Tchaikovsky/...mix a black key/ wid a white key/ is a half-caste symphony?" and "Picasso/ mix red an green/ is a half-caste canvas?" I think Agard not only wants to use art as a metaphor to back up mixes of colour but also wants to prove that people from different cultures are included in society, as Tchaikovsky is from Russia and Picasso from Spain. A theme from 'This Room' is celebration. Dharker's persona is not only moving to another culture but also relishing the opportunity. The poem makes it clear that the changes in the persona's life are benefiting them. This is proven when Dharker writes, "time and place/ to be alive", "Pots and pans bang together/ in celebration" and "In all this excitement". Another theme is movement. ...read more.