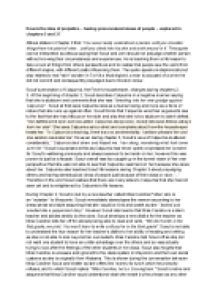 ﻿How is the idea of prejudice ? having preconceived views of people ? explored in chapters 2 and 3? Atticus states in Chapter 3 that ?You never really understand a person until you consider things from his point of view?until you climb into his skin and walk around in it.? This quote can be interpreted as Atticus saying that Scout and Jem should not prejudge another person without knowing their circumstances and experiences. He is teaching them a life lesson to take a look at things from others perspectives and to realise that people see the world from different angles, with different pasts influencing them. The quote speaks metaphorically but also relates to real "skin" as later in To Kill a Mockingbird, a man is accused of a crime he did not commit and consequently prejudged due to his skin colour. Scout?s perception of Calpurnia, the Finch?s housekeeper, changes during chapters 2-3. At the beginning of chapter 2, Scout describes Calpurnia in a negative manner saying that she is stubborn and comments that she was ??breaking into her new grudge against Calpurnia??. ...read more.

Scout immediately stereotypes the woman according to her dress sense and style assuming that she would be kind and sweet as she ??looked and smelled like a peppermint drop??. However Scout later learns that Miss Caroline is a stern teacher and abides strictly by the rules. Scout develops a new dislike for the teacher as Miss Caroline tells her off for already being able to read and write, "We don't write in the first grade, we print. You won't learn to write until you're in the third grade". Scout is not able to understand the true reason for her teacher?s dislike to her ability of reading and writing as she is not able to look beyond her own beliefs. Miss Caroline told Scout off as she did not want one student to have an unfair advantage over the others and so was actually trying to look after the feelings of the other students in her class. Scout also forgets that Miss Caroline is unaware and ignorant to the class system in Maycomb and the town social customs as she is originally from Alabama. ...read more.

She believes that the way Walter ate was wrong and assumes that she is of higher status and class as she is a Finch and he is a Cunningham. However Scout later learns from Calpurnia that just because someone?s different does not mean she gets to judge them, ??Don?t matter who they are, anybody sets foot in this house?s yo? comp?ny, and don?t let me catch you remarkin? on their ways like you so high and mighty!??. In conclusion, the idea of prejudice is explored through several characters in order to highlight the nativity of Scout as she is only a six year old who still has a lot to learn about Maycomb County and its residents. The characters show how much Scout still has to progress and also hints at the main moral of the story which is to not prejudge anyone before all of the details are known about them. It also foreshadows to further exploration into the theme of prejudice and the negative effects they have on Maycomb society. ...read more.