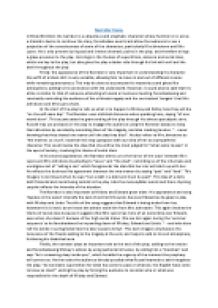 How is the Narrator portrayed in Blood Brothers and what is his function?

Transfer-Encoding: chunked ﻿Narrator Essay In Blood Brothers the narrator is a ubiquitous and enigmatic character whose function is to act as a dramatic device to continue the story, foreshadow events and allow the audience to see a projection of the consciousness of some of the characters, particularly Mrs Johnstone and Mrs Lyons. He is only present during sad and intense dramatic points in the play, and therefore brings a grave presence to the play. He brings in the themes of superstition, violence and social class, which are key to the play, but also gives the play a darker side through his link with evil and the devil throughout the play. Firstly, the appearance of the Narrator is very important in understanding his character. His outfit of a black shirt is very versatile, allowing him to move in and out of different scenes while remaining anonymous. ...read more.

This could invoke the idea that she will be the most judged for ?what came to pass? in the eyes of society, involving the theme of social class. In his second appearance, the Narrator alerts us to the horror of the ?pact? between Mrs Lyons and Mrs Johnstone by alluding to ?Jesus? and ?the devil?, reminding us of the inhumane and unreligious act of ?selling a son? which foregrounds the idea that her sins will catch up with her. He reflects the business like agreement between the two women by saying ?pact? and ?deal?. This imagery is continued when he says ?but a debt is a debt and must be paid?. This idea of a debt, both financial and moral being central to the play. Also the monosyllabic words and there rhyming couplet reflects the intensity of the situation. The Narrator is also important as Mickey and Edward grow older. ...read more.

intrusion, by calling him a ?madman? and says ?he?s screaming deep inside you?, which heralds the urgency of the moment the prophecy will come true. He then asks the audience directly possibly what Russell wanted to ask throughout the play; ?do we blame superstition for what has come to pass or what we, the English have come to know as class?? ending the play by forcing the audience to consider who or what was responsible for the death of Mickey and Edward. Therefore we can see that the Narrator is an essential dramatic device used by Russell to accentuate key moments and themes throughout the play. He creates a chilling atmosphere that adds to the audiences? experience and deliberately juxtaposes with the joyful atmosphere elsewhere in the play. He acts as a constant reminder to the audience of Mickey and Edward?s fate as a result of Mrs Johnstone and Mrs Lyons ?contract?, by adding to the deliberate tragedy of the story considerably. ...read more.