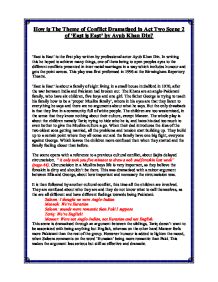 How is The Theme of Conflict Dramatised in Act Two Scene 2 of 'East is East' by Ayub Khan Din?

How is The Theme of Conflict Dramatised in Act Two Scene 2 of 'East is East' by Ayub Khan Din? 'East is East' is the first play written by professional actor Ayub Khan Din. In writing this he hoped to achieve many things, one of them being to open peoples eyes to the different conflicts presented in inter racial marriages in a way which includes humour and gets the point across. This play was first preformed in 1996 at the Birmingham Repertory Theatre. 'East is East' is about a family of eight living in a small house in Salford in 1970, after the war between India and Pakistan had broken out. The Khans are an anglo-Pakistani family, who have six children, five boys and one girl. The father George is trying to teach his family how to be a 'proper Muslim family', whom in his eyes are that they listen to everything he says and there are no arguments about what he says. But the only drawback is that they live in a community full of white people. The children are too westernised, in the sense that they know nothing about their culture, except Maneer. ...read more.

(Act 1 Scene 4) The audience is shown a religious conflict between Tariq and Pakistanis. We are shown that Tariq detests his religion because he keeps referring to anyone from it a 'Paki', which is rude, shows he doesn't care and he looks down on his religion. The children are shown to have effects from all the conflicts around them. Sajit describes his parka as being a sanctuary to him. He is feeling the strain of the arguments. "when its all done up...I don't have to listen to anyone arguing and shouting at me..." (Page-46). This scene is dramatised as a sensitive part of the play, Sajit is opening up to his older brother, Abdul, and Abdul is seeing Sajit in a light he never saw before. Sajit to him was always the rude ignorant mischievous child who never wanted to take his parka off and who always seemed a bit dotty. After their talk Abdul wishes he had a parka to get away from it all, "I wish I had a parka." (Page-47) all the conflicts, living up to his father's expectations and his complicated life. ...read more.

George getting angrier by the minute with Ella shouting at him about how he never listens to his children and crushes their confidence, and lives. " I'm not gonna stand by and let you crush them one by one because your pig bloody ignorance" (page-51) At which point George snaps because pig in the Muslim religion is not a very nice thing. This part of the argument is dramatised with George and Ella screaming at each other at the tops of their voices, hoping the louder they get the more the other person would understand. The argument escalates so far that it ends in physical abuse. It is dramatised by "George grabs Ella violently by her hair and pulls her to the ground. He kicks and beats her." (Page-51). This form of dramatisation is very extreme and powerful in the sense that it makes the audience feel for the victim character, Ella, and it is a very dramatic end to a scene. It gives the play a pre climax before the end, which keeps the audience entertained and engaged. Outside the shop window Sajit is watching and crying, this argument between George and Ella fits in with him wearing the parka to escape the shouting and fighting. ...read more.