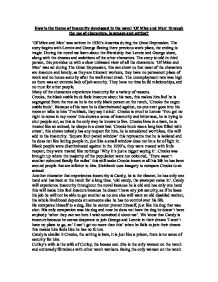 How is the theme of insecurity developed in the novel 'Of Mice and Men' through the use of characters, language and setting?

How is the theme of insecurity developed in the novel 'Of Mice and Men' through the use of characters, language and setting? 'Of Mice and Men' was written in 1930's America during the Great Depression. The story begins with Lennie and George fleeing there previous work place, the ending is tragic. During the novel we learn about the friendship that Lennie and George share, along with the dreams and ambitions of the other characters. The story is told in third person, this provides us with a clear unbiased view of all the characters. 'Of Mice and Men' was set during The Great Depression, this can show us that most of the characters are insecure and lonely, as they are Itinerant workers, they have no permanent place of work and no house security after the wall street crash. The unemployment rate was high so there was an extreme lack of job security. They have no time build relationships, and no trust for other people. Many of the characters experience insecurity for a variety of reasons. Crooks, the black stable buck feels insecure about his race, this makes him feel he is segregated from the rest as he is the only black person on the ranch, 'Crooks the negro stable buck'. ...read more.

He compares himself to a dog, like he cannot protect himself, just like his dog that was shot. His only companion was his dog and now he does not have the dog he doesn't have anybody 'when they can me here I wish somebod d shoot me'. We know that Candy is insecure because he seems desperate to join George and Lennie in their dream 'I won't have no place to go, an' I can't get no more than this' when he fails to join their dream this makes him feels like he has no future. Candy is similar it Crooks, the setting is bare, it is just like a prison, there is no sense of security for him. Curley's wife is the wife of Curley, the bosses son. She is the only women on the ranch and extremely flirtatious with other ranch workers. Being the only women on the ranch she feels she has power over the men, she flirts with them to overcome her insecurity, she tries to cover up that she is insecure, and she marries Curley to escape her loneliness. Everybody thinks that she is dangerous, but she knows more than everybody thinks 'Think I don't know where they all went'. ...read more.

He is constantly asking for Georges approval, he relies on George over everything 'Where we goin', George'. So many of the men on the ranch are insecure because they only have their dreams, they have no real life ambitions that they know will truly happen. They have no job or house security this can make them insecure because they do not have any idea of where their life is going to go, they literally have nothing. They are so insecure because they cannot have relationships or friendships with the other ranch workers, this will make them feel like they cannot be themselves and make them feel alone and on their own. In my opinion George does feel a sense of insecurity at the end of the novel because he does no have Lennie anymore, even though sometimes he did not want Lennie with him at all times 'if I was alone I could live so easy' he still liked him to be there and to know that he had someone that relied on him even if he did not rely on himself. Without Lennie George feels alone just like the other ranch workers did, he will soon become as insecure and enclosed as them. ...read more.

The essay begins begins well, with an introduction that frames the theme of insecurity within the historical and social context. It continues by examining the roles played by some of the characters and the reasons for their underlying insecurity. The essay peters out, however, before having covered all the characters or having reached any conclusions. Curley is not mentioned in this context, and he is certainly insecure, particularly concerning his short stature and his relationship with his wife.

Paragraph and sentence construction is loose in parts, though quotations are used to good effect and incorporated skilfully into the flow of the text.