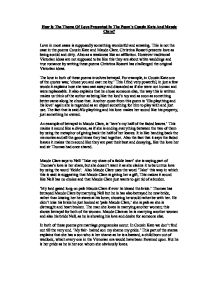 How Is The Theme Of Love Presented In The Poem's Cousin Kate And Maude Clare?

How Is The Theme Of Love Presented In The Poem's Cousin Kate And Maude Clare? Love in most cases is supposedly something wonderful and amazing. This is not the case in the poems Cousin Kate and Maude Clare. Christina Rosseti presents love as being sordid and dirty. Also as a weakness like an affliction. However traditional Victorian ideas are not supposed to be like this they are about white weddings and true romance by writing these poems Christina Rosseti has challenged the original Victorian ideas. The love in both of these poems involves betrayal. For example, in Cousin Kate one of the quotes was; 'chose you and cast me by.' This I find very powerful, in just a few words it explains how she was cast away and discarded as if she were not human and were replaceable. It also explains that he chose someone else, the way this is written makes us think of the author as being like the lord's toy and as soon as something better came along he chose that. Another quote from this poem is 'His plaything and his love' again she is regarded as an object something for him to play with and just use. ...read more.

Rivalry is shown in both of these poems; with cousin Kate it is between the narrator and Cousin Kate. Examples of this are shown in the poem 'you grew more fair than I,' by saying this it is saying that beauty meant a lot, and in this paragraph it makes the narrator sound envious that her cousin was younger and more beautiful. We get the impression that she is younger as she says 'you grew' this makes it sound like she had blossomed and grown in to a young women. This shows that the lord's interest is based on body. It also shows comparisons between the two women 'because you were so good and pure he bound you with his ring: Because you were so good and pure, call me an out cast thing.' This shows the comparison that virginity meant a lot in those days to be married you had to be pure and still a virgin. If not you were out cast, which is what happened to the narrator. The words bound and thing suggest that she is not humanised. The poem compares the narrator and cousin Kate on many occasions really showing the rivalry between the two of them it also says: 'Even so I sit and howl in dust you sit in gold and ...read more.

In the poem he is made to sound unkind and bitter, for example 'he lured me to his palace home.' He tricked her and lured her like a hunter might do to an animal, which again shows he has more power. He doesn't treat her as if she is a human to him this is just a game to hunt her down then use her as his plaything until he gets bored and has to hunt again. Another reason which shows he has more power is the fact he slept with the narrator then just discarded her and moved on to her cousin. A woman in those days could not do that and it would not be possible; she would be considered by the people of the Victorian era as a wanton strumpet; but for the man things were different he could sleep around and get away with things as that's just the way things were. I think both of the poems represent the meaning of love in similar ways. They each involve one man and two women; they also both involve betrayal, beauty, pre-marriage pregnancies and rivalry. Christina Rosseti didn't show love as being the wonderful emotion that most people think it is. She portrayed love as feelings of wretchedness and despair. By Emily Willis 10Pri ...read more.