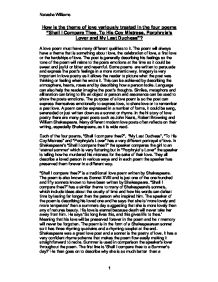 How is the theme of love variously treated in the four poems &quot;Shall I Compare Thee, To His Coy Mistress, Porphryia's Lover and My Last Duchess&quot;?

How is the theme of love variously treated in the four poems "Shall I Compare Thee, To His Coy Mistress, Porphryia's Lover and My Last Duchess"? A love poem must have many different qualities to it. The poem will always have a theme that is something about love, the celebration of love, a first love or the hardships of love. The poet is generally describing his feelings so the tone of the poem will relate to the poets emotions at the time so it could be sweet and joyful or bitter and resentful. Some poems are written to persuade and express the poet's feelings in a more romantic way. Imagery is very important in love poetry as it allows the reader to picture what the poet was thinking or feeling when he wrote it. This can be achieved by describing the atmosphere, hearts, roses and by describing how a person looks. Language can also help the reader imagine the poet's thoughts. Similes, metaphors and alliteration can bring to life an object or person and assonance can be used to show the poets emotions. The purpose of a love poem is so the poet can express themselves emotionally to express love, to share love or to remember a past love. A poem can be expressed in a number of forms, it could be sang, serenaded or just written down as a sonnet or rhyme. ...read more.

He says 'Sometimes too hot the eye of heaven shines' meaning that in summer it can get too hot or 'often his gold complexion dim'd' it can go away entirely but that his lover's 'eternal summer shall not fade' her brilliance will never go away. Shakespeare uses personification and metaphors to describe what he is feeling and to bring the sun to life as a person. The speaker is using the poem to preserve his love forever on the paper as he says in the last rhyming couplet 'So long as men can breath or eyes can see, / So long lives this and this gives life to thee.' Showing the reader that as long as people read his poem they will remember his love and her memory will never die. The speaker is ardently in love with his lover because he wishes to preserve her for eternity. "To His Coy Mistress" was written by Andrew Marvell and is his most popular poem today. Marvell wrote poems, dialogues, public commendations and satires. He wrote for fun, not for profit and most of his poetry remained in unpublished form until after his death in 1678. In this poem the speaker attempts, through argument, to win over his coy Lady. It is rather more then just a seduction poem. The purpose of the poem is so that the speaker can seduce his mistress to take their relationship to the next level. ...read more.

This seems calm and sweet and he uses it to get to his Mistress's heart. But he ruins his sweet moment with another violent simile, 'like amorous birds of prey'. By using more violent lines amongst soft flattery in the last stanza the speaker is likely to win over his Mistress. In "To His Coy Mistress" Marvell treats women like objects and does not seem to have a very high opinion of them. He grows very impatient with his Mistress and especially in the last stanza he repeats the word 'now' quite often. He says 'Now therefore' 'Now let us' and 'And now.' Although the speaker in the poem treats both love and women with a casual attitude he knows that with the art of flattery he will end up getting his own way. "Porphyria's Lover" is written by Robert Browning and is in the form of a dramatic monologue. Dramatic monologues were used by Victorian poets to express the most cruel and heterodox opinions, although at the same time making it clear that they themselves did not hold the same views. It was a way of lying while seeming to tell the truth. In this poem the poet tries to present the vision of love as desire or longing, Porphyria's lover wishes for them to always be together yet because she is married it cannot always be so. The reader will learn this when the speaker says 'But passion sometimes would prevail,' meaning that they could not always be together. Natasha Williams 1 ...read more.