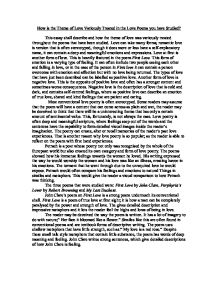 How is the Theme of Love Variously Treated in the Love Poems you have Studied?

How is the Theme of Love Variously Treated in the Love Poems you have Studied? This essay shall describe and how the theme of love was variously treated throughout the poems that have been studied. Love can take many forms; romantic love is version that is often stereotyped, though it does more or less have a self-explanatory name, it can contain a deep and meaningful emotions and expressions. Love at first is another form of love. This is heavily featured in the poem First Love. This form of emotion is a varying type of feeling. It can often include two people seeing each other and falling in love, or in the case of the person in First love it can contain a person overcome with emotion and affection but with no love being returned. The types of love that have just been described can be labelled as positive love. Another form of love is negative love. This is the opposite of positive love and often has a stronger content and sometimes worse consequences. Negative love is the description of love that is cold and dark, and contains self-centred feelings, where as positive love can describe an emotion of true love, shared and kind feelings that are patient and caring. ...read more.

Clare is trying to express how every other woman is irrelevant and his mind has only one focus now and that is on the one woman he desires. He is unable to fall in love with anyone else and his heart has been stolen, never to return to him. The overall mood of the poem is deceiving at first it seems positive but then on a second look it has a dark mood lurking in the writing. The poem gives the reader the sense that they can feel the butterflies that some one who has just fallen in love for the first time has to face. John Clare describes his experience in a passionate and explosive way and creates or relives memories. The second poem that was studied is named Porphyrias Lover. It is a dark poem containing obsessive and possessive love about a man whose lover is of a higher stature to him, leaving him to feel envious and jealous of her. He is so enraged and angry because of his lover that his passionate insanity leads him to murder her, so that she can always be by his side. This poem contains many similarities to First Love by John Clare: The way that the male character is unsure whether or not his love is being returned. ...read more.

He assumes that the artist painted it for him, not because he asked for it, and says that the servant is less learned than him. The duke assumes that his wife is having an affair when he says "her husband presence, only a spot of joy!" He is always jealous because she is "too soon made glad." Meaning that she was pleased with everyone so it was hard for the duke to be number one. He lists her odd behaviour because he expects special treatment, though she still treats everyone equal. He is jealous because his gift of 900 year old name is praised only as much as someone else's gift. The duchess was treated like a child always being taught. He says that her lack of praise for him didn't matter, but he still goes on about it. The duchess had no independence. My last duchess shows how one mans greed and pride can overcome the most hideous of sins and create devastating affects. As a conclusion all three poems treated the theme of love differently. From the dark murderer of Porphyria's lover, to the overcome lover in First Love. The many forms of love can be variously treated. My personal favourite was 'My Last Duchess' the true snobbery of an English duke is enough to kill the sweetest female. An excellent poem with meaning and moral. ...read more.