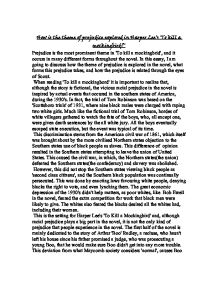 How is the theme of prejudice explored in Harper Lee's 'To kill a mockingbird?'

How is the theme of prejudice explored in Harper Lee's 'To kill a mockingbird?' Prejudice is the most prominent theme in 'To kill a mockingbrid', and it occurs in many different forms throughout the novel. In this essay, I am going to disscuss how the theme of prejudice is explored in the novel, what forms this prejudice takes, and how the prejudice is related through the eyes of Scout. When reading 'To kill a mockingbord' it is important to realize that, although the story is fictional, the vicious racial prejudice in the novel is inspired by actual events that occured in the southern states of America, during the 1930's. In fact, the trial of Tom Robinson was based on the 'Scottsboro trials' of 1931, where nine black males were charged with raping two white girls. Much like the fictional trial of Tom Robinson, hordes of white villagers gathered to watch the fate of the boys, who, all except one, were given death sentences by the all white jury. All the boys eventually escaped state execution, but the event was typical of its time. This discrimination stems from the American civil war of 1861, which itself was brought about by the more civilised Northern states objection to the Southern states use of black people as slaves. ...read more.

Jem recognises this class structure when he tells Scout that there are 'four kinds of folks in the world'. These are: - The Finches and their neighbours (the white middle class) -The Cunnighams (the farming community) -The Ewells (the lowest class of white) -The Blacks (automatically the lowest group in society) While they are not persecuted as heavily as the lower groups in the social hiearchy of Maycomb, women were still viewed as unequal to men at the time the novel is set. Scout learns about women's position in society from many different sources throughout the novel, such as Miss Maudie when she explains to Scout that foot-washing Baptists 'think women are a sin by definition', Atticus when he explains to Scout that, in Alabama, women are not allowed to sit on juries, and Aunt Alexandra's constant pressure on Scout to become more like a 'Southern belle' (which is Maycomb's idealistic view of how a woman should be), a point Scout eventually begins to concede. Because of this idealised view of women, the men of Maycomb were supposed to show chivalry and respect to women, which is why rape is treated with such severity in Maycomb. This chivalry is also one of the reasons why Mayella Ewells' story was believed over Tom's. ...read more.

to the children), innocence (Tom of the crime of rape, Boo of his supposed evil persona), and both are imprisoned (Tom is imprisioned in jail, Boo is imprisoned in his house, to protect him from prejudice). Scout does not make the comparison between Tom, Boo, and a mockingbird until the end of the novel, when she comments that the public exposure of Boo Radley would be 'sort of like shootin' a mockingbird'. In 'To kill a mockingbird' Harper Lee challenges prejudice by showing how the central character (Scout) is changed by applying Atticus' maxim of seeing things from another persons perspective to her own life. When the novel begins, Scout and the children are pestering and mocking Boo Radley, with little regard for Boo's feelings. At the end of the novel scout begins to understand Boo, and why he lives his life the way he does. Harper Lee also challenges the accepted cultural stereotype of the black people, which was that they are evil or stupid and childlike, by portraying the characters of Tom Robinson and Calpurnia as normal people, with the same depth of emotions as white people. However, Harper Lee does not suggest that there is a quick soulution to prejudice, as Miss Maudie says in the book, 'baby steps' must be taken, before you can cure the world of prejudice. ...read more.