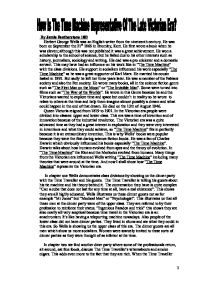 How is The Time Machine representative of the late victorian era?

By Jamie Featherstone 10D Herbert George Wells was an English writer from the nineteenth century. He was born on September the 21st 1866 in Bromley, Kent. He first wrote a book when he was eleven; although this was not published it was a great achievement. He won a scholarship to the school of science, but he failed due to his other interests such as history, journalism, sociology and writing. His dad was a pro cricketer and a domestic servant. This may have had an influence on his work like in "The Time Machine" with the class divisions. His support in socialism influenced his work especially "The Time Machine" as he was a great supporter of Karl Marx. He married his cousin Isabel in 1891. But sadly he left her three years later. He was a member of the Fabians society and also the Pen society. He wrote many books, all in the science fiction genre such as "The First Man on the Moon" or "The Invisible Man". Some were turned into films such as "The War of the Worlds". He wrote in this Genre because he and the Victorians wanted to explore time and space but couldn't in reality so he wrote to relate to others at the time and help them imagine almost possibly a dream and what could happen in the end of that dream. He died on the 13th of August 1946. Queen Victoria reigned from 1819 to 1901. In the Victorian era people were divided into classes: upper and lower class. This era was a time of invention and of innovation because of the industrial revolution. ...read more.

In chapter five The Time Traveller talks about the Morlocks, he describes them using animals from his own time to point out its features because it is a subterranean creature which has "large eyes" or a "bleached look". This shows that the Morlocks had been living underground for a long time, so long that they had adapted physically. We know this because of their features which are typical characteristics of things that live in the dark. They stay underground because the Eloi make them. This is similar to the situation in Wells' time where the lower classes believed they were in a good position. Marx called this false class consciousness. The fact that the Morlocks have started rebelling in the novel shows us what Wells would like to happen in real life. This is an allegory. Wells obviously would like a revolt from the lower classes to make his ideal: a communist world. In chapters six and seven the Time Traveller says that the Eloi are in disgust of the Morlocks: "Probably my shrinking was largely due to the sympathetic influence of the Eloi, whose disgust of the Morlocks I now began to appreciate". This illustrates the Eloi to believe they are better than the Morlocks which reveals a parallel with the Victorian society, just like the upper class. It also shows the Time Traveller agrees which means he feels he is above the Morlocks (the lower class). This is typical of the Victorian era because they were a society with divided classes. Also the Time Traveller is ill-equipped to deal with the Morlocks: "I have thought since how ill-equipped I was for such an experience". ...read more.

It would have really interested them because Wells shows all of it in reverse and this would have yet again shocked the Victorian public and would have made the book more infamous and would have made it more popular. In chapter 12 the Time Traveller offers the audience the chance to be sceptical about his adventures. "Take it as a lie". This demonstrates he is letting the audience disbelieve him because he knows better. Wells is warning the upper class about their treatment of the lower class and the fact that the lower class will revolt if it does not change. We know it is aimed at the upper class because only they at the time could read because the lower class could not afford to go to school where as the upper class could (this represents the late Victorian era because after "The Time Machine" was released the lower class got more opportunity to go to school and to learn to read and so it is only relevant to that period). He offers Communism as an alternative to the poor treatment of the lower class. This is a moral warning, so Wells is letting the Victorian upper class have the option to see it as a warning, but like the dinner guests, they also have the option to deny it. Wells lets this happen because he knows the upper class will not take it seriously and Wells does not want to challenge their status because after all it is just a book and if it is totally on the lower classes side the upper class would not buy it and he would not get his message across at all. Conclusion I can conclude that "The Time Machine" as a novel is very representative of the late Victorian era. ?? ?? ?? ?? 1 ...read more.