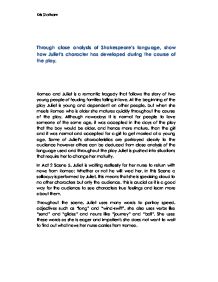 how Juliet's character has developed during the course of the play

Through close analysis of Shakespeare's language, show how Juliet's character has developed during the course of the play. Romeo and Juliet is a romantic tragedy that follows the story of two young people of feuding families falling in love. At the beginning of the play Juliet is young and dependent on other people, but when she meets Romeo who is older she matures quickly throughout the course of the play. Although nowadays it is normal for people to love someone of the same age, it was accepted in the days of the play that the boy would be older, and hence more mature, than the girl and it was normal and accepted for a girl to get married at a young age. Some of Juliet's characteristics are portrayed clearly to the audience however others can be deduced from close analysis of the language used and throughout the play Juliet is pushed into situations that require her to change her maturity. In Act 2 Scene 5, Juliet is waiting restlessly for her nurse to return with news from Romeo: Whether or not he will wed her. In this Scene a soliloquy is performed by Juliet, this means that she is speaking aloud to no other characters but only the audience. This is crucial as it is a good way for the audience to see characters true feelings and learn more about them. Throughout the scene, Juliet uses many words to portray speed, adjectives such as "long" and "wind-swift", she also uses verbs like "send" and "glides" and nouns like "journey" and "ball". ...read more.

Juliet uses many oxymorons here to show she is confused, and oxymoron is two words of opposite meaning describing one thing, such as "Beautiful tyrant", "Dove-feathered raven" and "honourable villain". Juliet is perplexed as to how someone who appears so pure, so perfect, can be evil and can do wrong. How the body of an angel can hide the feelings of a devil. Juliet needs to decide whether to be loyal to her family who she has known her whole life and overlook Romeo or choose Romeo, her husband and her love who she has only known for less than a week. She wants to do what is best for everyone, we can see this from the questions she is asking, but she is only young and does not know what to do, her family or her nurse have always previously made the decisions for her. Then in lines 100 to 101: "But wherefore, villain, didst thou kill my cousin? That villain cousin would have killed my husband" this shows the audience that Juliet has the idea that Romeo has murder Tybalt, because if he hadn't, Tybalt would have slaughtered Romeo. This is because at that moment, she is confused, she does not fully understand what is going on and is trying to comfort herself. Again, in lines 112 to 114 Juliet says "...and Romeo is banished...that one word 'Banished', has slain ten thousand Tybalts". Here, Juliet is saying that she would rather Tybalt be murdered ten thousand times than for Romeo to be banished. This tells the audience that she is starting to show more loyalty to Romeo over her family and the line "O find him! ...read more.

This lines shows certainty and her love and passion towards Romeo. Even though she has just imagined terrible things happening, the ghost of her cousin coming to her, the rotting corpses of her ancestors beside her, she has remained loyal towards Romeo and would chance anything for him. The final line spoken by Juliet in the play is "Yea, noise? then I'll be brief. O happy dagger! This is thy sheath; there rust, and let me die." This one line shows her hastiness of dying and her lack of fear of the matter. She says that the dagger belongs in her and that she wants to die. In the beginning of the play, we saw Juliet as an obedient, childish, strong willed child. She did what she was told to do and did not really think for herself. When she met Romeo she began to disobey her parents and become more self reliant. She started to lie to spend time with someone else and get away from her family. Throughout the play Juliet was confronted with the death of Tybalt and Romeo. This made her confused and a bit crazed. Towards the end of the play she had become self reliant, she did not require anybody to tell her what to do and had matured a lot, she understood what it is like to be in love even if it did lead to her death. The main factors that caused these changes in Juliet's maturity were meeting Romeo that introduced her into the idea of love, the death of Tybalt and Romeo and the loss of faith towards her nurse. Juliet started off as a child but matured throughout the play, becoming an independent adult. ?? ?? ?? ?? Kris Statham ...read more.