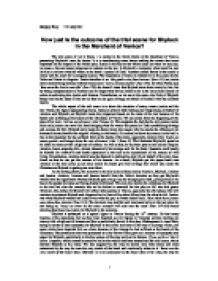 How just is the outcome of the trial scene for Shylock in the Merchant of Venice?

Sanjoy Roy 11 Latymer How just is the outcome of the trial scene for Shylock in the Merchant of Venice? The trial scene of Act 4 Scene 1 is central to the whole theme of the Merchant of Venice, presenting Shylock's case for justice. It is a transforming scene hence making the events that occur important on the impact of the whole play. Justice is the key to the whole scene so when we say just, we mean a fair and moral judgement in relation to the law. In Shylock's viewpoint, what would be just for him is to have what he wants in the bond- a pound of flesh. Another central theme to the scene is mercy and the need for it alongside justice. The importance of mercy is referred to in this scene by the Duke and Portia in disguise. Portia describes it as 'the gentle rain from heaven' (line 181) as justice alone cannot bring fairness without mercy since 'mercy seasons justice' (line 193). So when Portia says 'then must the Jew be merciful' (line 178) she doesn't mean that Shylock must show mercy by law, but by being compassionate to Antonio and to forget what he has failed to do is the only moral course of action to achieving true justice and fairness. Nevertheless, as we see in the scene, the fixity of Shylock keeps him by the letter of the law so that he can gain revenge on behalf of himself who has suffered dearly. The whole aspect of the trial scene is to show the situation of mercy versus justice and the law. Portia, the figure representing mercy, wants to achieve both fairness and forgiveness on behalf of Antonio and Shylock yet Shylock wants the judgement based on the letter of the law because of his hatred and suffering at the hands of the Christians of Venice. ...read more.

It is not surprising that when Portia intervenes in the trial and asks Shylock, 'then must a Jew be merciful,' his response is 'on what compulsion must I?' Shylock is strictly sticking to the letter of the law so it is unlikely that Portia's presence would change his decision. Nevertheless, Portia's speech in lines 180 to 201 was a powerful display for the quality and reason for mercy. She describes it as the 'mightiest in the mightiest' (line 184) and that it is 'enthroned in the heart of kings' (line 190), yet Shylock's obsession with justice means that the speech makes little impression on him. This is strange, even for Shylock because justice is what he demands in the trial, yet Portia shows that justice will not restore things the way they are unless we also have mercy, hence the statement 'mercy seasons justice' is true. This should encourage Shylock to be merciful to Antonio, but since he refuses to do so and wants to give judgement against the Merchant of Venice, this proves how his code of justice lacks humanity and mercy in the deed. The result to this trial scene is the twist that occurs, where rather than Shylock gaining his justice triumph and sweet revenge from the death of his enemy, Antonio gains justice and wins from the downfall of his murderer. According to Venetian law, Shylock must give half of his wealth to Antonio, the other half to the state and his life at the Duke's mercy. This development is not only ironic but also comical and adds to the comedy theme of the play because Shylock had so much to gain from the trial, yet he loses all he has to his victim that he came to close to killing. Shylock had suffered dearly as a result to what had happened in the trial scene. Given the extreme penalties the court could exact on Shylock, we could say that he was a victim of his own code of justice. ...read more.

The comical convention does make it difficult to get this important message to the audience, even though Shylock's defeat was essential to bring the play fully into that genre. The ending also affects how vindicated the outcome is, since Shylock is not mentioned at all in the final act of the play, therefore giving the impression that the characters are unaware of the threats that took place earlier. This brings into the ambiguous question on whether Shakespeare was anti-Semitic in the play. He does bring across the message of Shylock's suffering in his speech in Act 3 Scene 1, making him seem powerfully human, yet he receives the same treatment as a villain in the trial. The way that the humans respond rather happily in the end does bring the sense of unfairness into the way he was treated finally in the trial and the fact that Antonio says 'I dare be bound again, my soul upon the forfeit' in Act 5 Scene 1 (lines 251-2) does show that the trial experience has not taught Antonio nothing and he is still willing to swear oath on Bassanio's behalf. So although the ending does seem rather comical to the audience, its deeper meaning is quite serious and important in relation to the happenings of the play. In conclusion to the answer of the title question, I think that the outcome is just for Shylock in the trial scene, yet it is deeply unfair since Shylock was unwilling to show mercy and his request for the letter of the law meant that he was a victim of his own code of justice. Shylock received justice but much more than he wanted, as Portia said in line 312. His unwillingness to show love and forgiveness which was offered to him many times by the Duke and Portia meant that he gained unfair justice as a result of what he really desired, which was revenge and his bond. 1 1 ...read more.