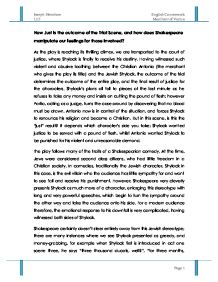 How Just is the outcome of the Trial Scene in Shakespeare's &quot;The Merchant of Venice&quot;, and how does Shakespeare manipulate our feelings for those involved?

How Just is the outcome of the Trial Scene, and how does Shakespeare manipulate our feelings for those involved? As the play is reaching its thrilling climax, we are transported to the court of justice, where Shylock is finally to receive his destiny. Having witnessed such violent and abusive loathing between the Christian Antonio (the merchant who gives the play its title) and the Jewish Shylock, the outcome of the trial determines the outcome of the entire play, and the final result of justice for the characters. Shylock's plans all fall to pieces at the last minute as he refuses to take any money and insists on cutting the pound of flesh; however Portia, acting as a judge, turns the case around by discovering that no blood must be drawn. Antonio now is in control of the situation, and forces Shylock to renounce his religion and become a Christian. But in this scene, is this the "just" result? It depends which character's side you take; Shylock wanted justice to be served with a pound of flesh, whilst Antonio wanted Shylock to be punished for his violent and unreasonable demand. The play follows many of the traits of a Shakespearian comedy. At the time, Jews were considered second class citizens, who had little freedom in a Christian society. In comedies, traditionally the Jewish character, Shylock in this case, is the evil villain who the audience has little sympathy for and want to see fail and receive his punishment. ...read more.

"Thou torturest me, it was my turquoise. I had it of Leah when I was a bachelor. I would not have given it for a wilderness of monkeys." Not only has Shylock lost his daughter and his money, he now finds out that one of his last treasured presents from his late wife has been sold off. Surely now, the audience must feel sympathy towards him, facing such torment from all around him when inside he is faced with massive issues. We also remember he is nothing more than a frail old man - we can't help but feel tremendously sorry for him in this situation. Shakespeare does, however, maintain essences of the stereotype still: annoying little repetitive segments: "What, what, what? Ill luck, ill luck?" "I thank God I thank God. Is it true is it true?" Although this is very irritating, it hardly justifies the abuse and hate he receives from the other characters, and certainly not his daughter's actions. Finally, in Act 4, Scene 1, we reach the trial scene where everything that has built up to this climactic event will at last be settled. Shylock comes in with every intention of getting revenge on Antonio by cutting a pound of his flesh from his breast, which would almost certainly kill him. Such anger and brutal rage from Shylock surely must be from more than just the unpaid debt - all the factors combining together all the way throughout the play have brought upon Shylock this need to hurt Antonio. ...read more.

Embarrassed, worn out, and confused about what just happened, a weary Shylock leaves the court and leaves Venice; nothing more than a frail old man again. So was this result "just"? It would certainly not have been just for it to go Shylocks way - the violent taking of Antonio's life would go against both of their religious beliefs, and certainly isn't morally acceptable. However, Shylock did deserve something out of this, be it some compensation at the end. Having seen him victimised so much throughout the play, there was still some sympathy for him there, even if he didn't help things by behaving so savagely in court. From Antonio's point of view, things went perfectly, but I believe he was definitely not in the right - his unnecessary cruel taunting of Shylock was just plain nasty, and his absolute insistence that he never looked upon him as an equal certainly got him very close to receiving a cruel punishment from Shylock. To conclude, I believe this was not a just result - Shylock was in the wrong for much of it, so in the sense of Antonio being spared, that went well. But, for Antonio to add insult to injury by forcing Shylock to go home bankrupt and a Christian was unnecessary and cruel. Shylock was a victim, but only by a margin. He shouldn't take demands too far, and Antonio should treat him with more respect. ?? ?? ?? ?? Joseph Henshaw English Coursework 11D Merchant of Venice Page 1 ...read more.