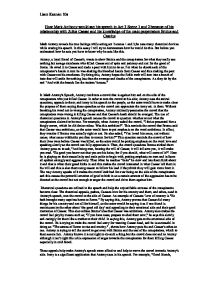 How Mark Anthony would say his speech in Act 3 Scene 1 and 2 because of his relationship with Julius Caesar and his knowledge of the main perpetrators Brutus and Cassius Mark Antony reveals his true feelings while acting act 3 scenes 1 and 2;he uses many rhetorical devices while orating his speech. In this essay I will try to demonstrate how he would do this. But before you understand how he acts you have to know why he acts like this. Antony, a loyal friend of Caesar's, wants to show Brutus and the conspirators for what they really are: nothing but savage murderers who killed Caesar out of spite and jealousy and not for the good of Rome. He owed it to Ceasar and made a pact with him to do so. For when he shook each of the conspirator's hands in turn he was shaking the bloodied hands from Ceasar and thus making the pact with Ceasar not his murderers. By doing this, Antony hopes the fickle mob will turn into a bunch of irate that will settle for nothing less than the revenge and deaths of the conspirators. As they do by the end "And with the brands fire the traitors' houses." In Mark Antony's Speech, Antony confronts a crowd that is against him and on the side of the conspirators who just killed Caesar. ...read more.

The way Antony speaks of it makes the crowd look bad for ever being on the side of the conspirators and this causes the powerful emotion of grief to kick in so a certain amount of the aggression has to be directed at the crowd but not enough to anger the crowd and drive them against him. Rhetorical questions are utilized in the speech and help the unjustifiable excuses of the conspirators become clear. The rhetorical appeals, pathos, Caesars love for his country and them, and ethos, used in Antony's speech, turn the crowd to the side of Caesar. An example of Caesars' love of country is "He hath brought many captives home to Rome." By saying this, Antony proves that Caesar did many things for his country and not all for himself, so the actor would be saying it as if one friend is reminiscent to the other about 'the good old day' and appealing to their emotional side and their good memories of Caesar. This also refutes Brutus' idea that Caesar was ambitious. Antony also makes the crowd feel pity by means such as; "If you have tears, prepare to shed them now," he says this slowly and caringly for them like a mother to their child. In saying this, Antony gets to the emotional side of the crowd. ...read more.

Antony did want to steal their hearts and uses this to make the crowd more at ease. He wanted to change their minds about the conspirators. Antony uses irony in his speech and it helps the crowd understand and see his viewpoints. Through this use of rhetorical questions, appeals, and irony, Antony does turn the crowd against the conspirators. This shows the effectiveness of the way he used these devices. In persuading the crowd to be on Caesar's side, Antony displays the power of these rhetorical devices. "Belike they had some notice of the people, how I had mov'd them. Bring me to Octavius." when he says this he is being ironic to the extreme with half a smile on his face and a very self-satisfied look on his face. In Conclusion Mark Anthony's speech is a very hard speech to act due to the fact of the complexity of his orating which he used in a better way then Brutus, simply by talking to them on their level not his, which simply confused them. So Their were many different ways Antony could say his speech but I think in this essay I have captured the true nature of how he would say the most important lines and also why he would say them in such a way, using irony, rhetorical questions, pathos, his and Caesar's ethos and appealing to both their emotions and their reason. Liam Keenan 10s ...read more.