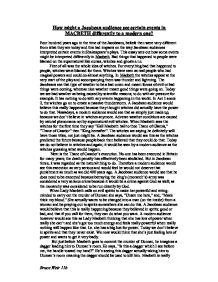 How might a Jacobean audience see certain events in MACBETH differently to a modern one?

How might a Jacobean audience see certain events in MACBETH differently to a modern one? Four hundred years ago in the time of the Jacobeans, beliefs then were very different from what they are today and this had impacts on the way Jacobean audiences interpreted certain events in Shakespeare's plays. This essay sets out how some events might be interpreted differently in Macbeth. Bad things that happened to people were blamed on the supernatural like curses, witches and ghosts e.t.c. First of all was the whole idea of witches. For everything bad that happened to people, witches were blamed for them. Witches were seen as real people who had magical powers and could do almost anything. In Macbeth the witches appear at the very start of the play and accompanying them was thunder and lightning. The Jacobeans see that type of weather to be a bad omen and meant forces of evil or bad things were coming, whereas nice weather meant good things were going on. Today we see bad weather as being caused by scientific reasons; to do with air pressure for example. It has nothing to do with any events happening in the world. In Act 1 scene 2, the witches go on to create a massive thunderstorm. A Jacobean audience would believe this really happened because they thought witches did actually have the power to do that. ...read more.

We now would think that she's just feeling lots of power and wants to get it very badly. But just before Macbeth goes to commit the murder of Duncan, he imagines a dagger leading him to Duncan's room. He says, "Is this a dagger which I see before me, the handle toward my hand?" He's seeing this dagger actually taking him to Duncan's room meaning the dagger should be used to kill him. Macbeth is really convinced and believes it's there. Because of that, a Jacobean audience would think the witches have put it there in his head because they told the future earlier on in the play, that Macbeth will become king, and he would have needed to kill Duncan to do it. A modern audience on the other hand would think he's having a hallucination and he's just simply imagining it; probably explained by the stress of being about to kill the King. Jacobean's might not have thought that because they didn't appreciate people can imagine things deliberately or because of stress or mental illness. They would not understand those things. In addition, Macbeth sees a vision of Banquo's ghost at a banquet. He says to the other guests, "Which of you have done this?" Again, like the dagger only he can see it and he believes it really was there. A Jacobean audience would have believed in ghosts and life after death. ...read more.

A modern audience would see this as Macbeth being drugged by the witches and that potion made him go on to see those apparitions, perhaps in some sort of trans or dream. We don't believe in witches having the magical power to do that themselves. The final thing whose perception has changed is Lady Macbeth sleepwalking. In Jacobean times, people did not understand that anyone can sleepwalk for whatever reason and thought anyone who did was mad meaning they thought Lady Macbeth was mad and stressed because of what her husband had just been doing. Today however, we think that anyone can sleepwalk and hence Lady Macbeth could have been feeling fine and she was doing a totally random thing. We no longer link sleepwalking with madness. So to conclude, in Jacobean times 400 years ago, people were less knowledgeable about science, weather and how the mind worked. This combined with poor education for most people then, meant that the Jacobeans had to make up phenomenon like witches and ghosts to explain why bad things happen or things go wrong. Nowadays, more people live in urban areas and are well-educated and less religious. Kings and queens have mostly been replaced by fully elected party leaders and the monarch is now just a person and far less important in decision making and politics. Doctors and psychology mean we can understand people's emotions better and events such as bad weather are now explained by science. ?? ?? ?? ?? Bruce Weir 11b ...read more.

This is a good essay that considers the context of reception of the play; it is however important to remember that an audience does not need to believe in everything Shakespeare writes about in order to appreciate the play as a successful piece of drama.