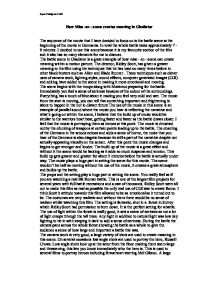 How Mise -en - scene creates meaning in Gladiator The sequence of the movie that I have decided to focus on is the battle scene at the beginning of the movie in Germania. In total the whole battle takes approximately 7 - 8 minutes. I decided to use this scene because it is my favourite section of the film and it also has so many elements for me to discuss. The battle scene in Gladiator is a great example of how mise - en - scene can create meaning within a motion picture. The director, Ridley Scott, has given a greater meaning to the film using his techniques that he has used so many times before in other block busters such as Alien and Blade Runner . These techniques such as clever uses of camera work, lighting styles, sound effects, computer generated images (CGI) and editing have added to the scene in making it more emotional and moving. The scene begins with the troops along with Maximus preparing for the battle. Immediately you feel a sense of eeriness because of the colour of the surroundings. Everything has a touch of blue about it making you feel very cold and wet. The music from the start is moving, you can tell that something important and frightening is about to happen in the not to distant future The use of the ...read more.

It is the perfect setting for a battle. The use of light within the forest is really good, it sets a scene of eeriness as not a lot of light creeps through the tall trees. Any light in addition to natural light was low key lighting to tie in with keeping it dark to add a sense of eeriness. During the battle the camera pans across the whole forest showing the battle as a whole to give the audience a sense of how large and important a battle this was. The camera work is very good, a large variety of shots are used to create meaning in this scene. On several occasions low angle shots are used to portray the hero, Russell Crowe. Low angle shots look up at the actor from the floor making them seem large and threatening, this lets you know immediately who the hero is. This is used in several films to portray heroes including Braveheart starring Mel Gibson. A large percentage of the scene is shot in Mid Shot where you can see from their waste to their heads. This is so that can view most of the battle that is taking place, it would no good trying to watch a sword fight if the camera was pointing at the actors feet. ...read more.

As the scene is drawing to an end the breath in the air of Russell Crowe is really emphasised to portray that he is tired and that its cold, also the volume of his panting is made louder than the background fighting and music to help create a sense of relief and tiredness. This is one of the best sequences of a film in recent years. It manages to capture so much action and emotion into such a short space of time with great directing. The whole scene takes less that 13 minutes from start to finish and has more action and emotion in it than some action films which last over 90 minutes. It's a fantastic opening to a film, without it I don't think that the next hour of the film would have been bearable because the next real action sequence isn't until Maximus is a slave in Morocco about 1 hour after this scene. I remember when I saw this for the first time the opening scene left me in excitement for the rest of the film. The directing and the editing really have to be admired as they have managed to create so much power and meaning just by the use of lighting, camera, props and acting. Overall, in my view, its one of the greatest films in the last 10 years, if not ever. Total Word Count: 1362 Ryan Trudgeon 7389 53840 ...read more.

This is a very competent essay that considers the choices of the director and the effects of these choices. The expression used could be more formal at times but a good coverage of ideas is shown and generally points are made in enough depth.