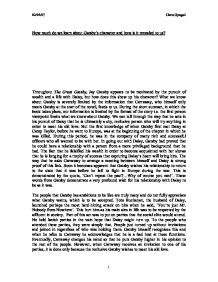 How much do we learn about Gatsby's character and how is it revealed to us?

How much do we learn about Gatsby's character and how is it revealed to us? Throughout The Great Gatsby, Jay Gatsby appears to be motivated by the pursuit of wealth and a life with Daisy, but how does this show up his character? What we know about Gatsby is severely limited by the information that Carraway, who himself only meets Gatsby at the start of the novel, feeds to us. During the short summer, in which the book takes place, our information is limited by the format of the story i.e. the first person viewpoint limits what we know about Gatsby. We can tell through the way that he acts in his pursuit of Daisy that he is ultimately a shy, reclusive person who will try anything in order to meet his old love. But the first knowledge of when Gatsby first met Daisy at Camp Taylor, before he went to Europe, was at the beginning of the chapter in which he was killed. During this period, he was in the company of many rich and successful officers who all wanted to be with her. In going out with Daisy, Gatsby had proved that he could have a relationship with a person from a more privileged background than he had. The fact that he falsified his wealth in order to become acquainted with her shows that he is longing for a trophy of success that capturing Daisy's heart will bring him. The way that he asks Carraway to arrange a meeting between himself and Daisy is strong proof of this link. Soon it becomes apparent that Gatsby wishes his relationship to return to the state that it was before he left to fight in Europe during the war. ...read more.

Before he met Cody, many of his dreams were purely to focus him and give him guidance. After he met Cody, this changed and he had the means with which to implement his plans for success. When Cody died, Cody's mistress Ella Kaye cheated Gatsby out of a substantial amount of money. These events helped Gatsby's visions of how to be a successful man to take shape and enabled his transition from a dreamer to a man of action. From that point forward, Gatsby vowed to recover what had been taken away from him and in doing that, fulfil his potential and live up to the persona created by himself. However much we know about how Gatsby acts in his social life, not much is revealed about his business dealings. Small talk at the parties he hosts tells Carraway that some believe he is a bootlegger, whilst others believe that he has killed a man. We later find out that the former is more likely to be true as what we later discover is that Tom Buchanan has carried out his own investigations and he believes that Gatsby is a bootlegger. In the same sequence, Gatsby confronts Tom about his affair in front of Daisy and his actions show us that when he needs to be, he can be quite strong about his feelings. But when business is involved, he is most secretive. All attempts to discover how he made his money are sharply rebuffed. At a party where Carraway and Gatsby were talking, a worker comes up to Gatsby and informs him that a friend from Chicago is on the telephone and that he should take the call. ...read more.

on 1920's America as a whole, in particular the disintegration of the 'American dream' in an era of unprecedented prosperity and material excess. The ash heaps that rise above during the journey to New York symbolise that gap between the glitz of the rich and those beneath them. In the book The Great Gatsby, we encounter many different views of this man. Is he a criminal in his business dealings, or simply a shy person always longing to meet the love of his life again? What I believe is that he is simply a good person trying to be accepted among those to whom he would like to become accustomed. However, in his na�vity, many of the people around him are nasty people. As Carraway puts it, 'They were careless people, Tom and Daisy - they smashed up things and creatures and then retreated back into their money or their vast carelessness, or whatever it was that kept them together, and let other people clean up the mess they had made...'. Such a strong statement fully shows how these people could have taken in Gatsby. Trying to hide business dealings cast doubt for the reader but for any man to go to all the trouble of arranging to meet his true love shows his romantic side. One thing that this novel shows to the reader is that although Carraway is told some details by Gatsby, what we know eventually turns into a great deal of information. I believe that Gatsby is overall a good person trying desperately to achieve the two things that his life has desired - Daisy and the pursuit of money, which were denied to him earlier. 02/05/07 Chris Gyngell 1 ...read more.