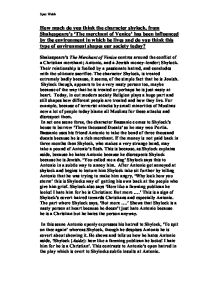 How much do you think the character shylock, from Shakespeare's 'The merchant of Venice' has been influenced by the environment in which he lives

How much do you think the character shylock, from Shakespeare's 'The merchant of Venice' has been influenced by the environment in which he lives and do you think this type of environment shapes our society today? Shakespeare's The Merchant of Venice centres around the conflict of a Christian merchant; Antonio, and a Jewish money-lender; Shylock. Their relationship is fuelled by a passionate hatred, and concludes with the ultimate sacrifice. The character Shylock, is treated extremely badly because, it seems, of the simple fact that he is Jewish. Shylock though, appears to be a very nasty person too, maybe because of the way that he is treated or perhaps he is just nasty at heart. Today, in out modern society Religion plays a huge part and still shapes how different people are treated and how they live. For example, because of terrorist attacks by small minorities of Muslims now a lot of people today blame all Muslims for these attacks and disrespect them. In act one scene three, the character Bassanio comes to Shylock's house to borrow 'Three thousand Ducats' so he may woo Portia. ...read more.

In this scene Antonio openly expresses his hatred to Shylock, 'To spit on thee again' whereas Shylock, though he despises Antonio he is covert about showing it. He shows and tells us how he hates Antonio aside, 'Shylock [Aside]: how like a fawning publican he looks! I hate him for he is a Christian'. This contrasts to Antonio's open hatred in the play which is overt to Shylocks subtle insults at Antonio. In act two scene three Shylock's daughter Jessica, also ridicules Shylock, 'Our house is hell and thou are a merry devil' Jessica says this to Lancelot, one of her fathers servants, as she plots to steal all of her fathers gold and jewels and run away with then to become Christian. Jessica seems to think that by stealing her father's possessions and becoming Christian she can save herself and become popular. This affects Shylock deeply when he arrives home and discovers what has taken place. This event just increases his hatred of Christians and Antonio. Antonio says 'I'll seal such a bond, and say there is much kindness in the Jew.' ...read more.

Bassanio and others are abusing him openly, 'Thou are an unfeeling man'. Bassanio offers Shylock double the amount owed by Antonio but Shylock only wants his pound of flesh from Antonio. This shows that shylock is so immersed in his plan of revenge that nothing but death will sway him from taking the flesh. Bassanio also says how shocked he is at Shylocks cruelty but not once throughout the play doe she comment on anyone else's cruelty to Shylock. This shows that the Christians will do anything to make shylock seem the evil person who wants to kill Antonio. Gratiano says 'O, be thou damned, inexorable dog' This is another insult cast blindly at Shylock because he is doing what was written down and sealed by the bond and he is following the law. In conclusion Shylock is influenced by the hateful Christian environment he is faced with because he is Jewish. Though as we see in the play, the character Tubal does not share the same level of hatred for Christians as Shylock does therefore I believe that shylock is influenced by the society he lives in but he is an evil person anyway. Also I believe that religion shapes and dominates our society today. ?? ?? ?? ?? Ryan Webb ...read more.