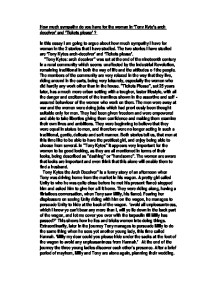 How much sympathy do you have for the woman in 'Tony Kyte's arch deceiver' and 'Tickets please' ? In this essay I am going to argue about how much sympathy I have for woman in the 2 stories that I have studied. The two stories I have studied are 'Tony Kytes arch-deceiver' and 'Tickets please'. "Tony Kytes: arch deceiver" was set at the end of the nineteenth century in a rural community which seems unaffected by the Industrial Revolution, remaining traditional in both the way of life and the attitudes of the people. The members of the community are very relaxed in the way that they live, riding around in the carts, being very leisurely, especially the women who did hardly any work other than in the house. "Tickets Please", set 25 years later, has a much more urban setting with a tougher, faster lifestyle, with all the danger and excitement of the tramlines shown in the assertive and self-assured behaviour of the women who work on them. The men were away at war and the women were doing jobs which had previously been thought suitable only for men. They had been given freedom and were empowered and able to take liberties giving them confidence and making them examine their own lives and ambitions. They were beginning to believe that they were equal in status to men, and therefore were no longer acting in such a traditional, gentle, delicate and soft manner. ...read more.

I get the impression that if Tony Kytes had been living in the 20th Century, he would not have got married at all. Because of the time, it was frowned upon to do anything intimate before marriage. We can see an illustration of this fact when Tony is speaking to his father. "Don't go driving about the country with Jolliver's daughter and making a scandal" The marriage also makes a point about the times they lived in were a good looking woman was expected to marry a rich man. So perhaps we should't feel symathy towards the women as there intentions may have been to marry rich but just got caught up in the emotion along the way. Therefore my sympathy is limited towards the woman they are aware of each other and the prenscene tony has with them so I feel like they have themselves to blame for the situation. John Thomas in " Tickets Please" " flirts with the girl conductors and also has a reputation for playing the field 'he flirts with the girl conductors in the morning and walks out with them in the dark of night' this shows he uses woman for his pleasure and doesent want a relationship 'when she started to take an intelliegent interest in him his life his character, he sheered off' this makes you feel sympathy towards the woman as they get there hopes up of being 'the one' John Thomas possibly had the confidence to do this because it was "war time" and " cripples and hunch backs..." ...read more.

talk, Tony" Another thing both of the men have very much in difference is that John Thomas is only interested in short-term relationships whereas Tony Kytes wants commitment and marriage. Overall both men enjoy their success with women. John Thomas deals with a much stronger group of females. Still my sympathy for John is very limited, I believe he gets exactly what he deserves, he treat women a lot worse than how Tony Kytes did, and he was way less of a gentleman, than Tony Kytes. So out of the two stories I believe 'tony kytes, the arch deceiver deserves the most sympathy because john Thomas's women got there own back and gave him what he deserved although annie took it hard ' I would't touch him,` she said. But her face quivered with a kind of agony' whereas tony kytes woman didt fight back and broke into tears 'Milly was sobbing her heart out' and they never managed to get there justice as tony didt end up alone but with Milly he used his charm and lies to get her and she gave in "Well, Milly," he says at last, going up to her, "it do seem as if fate had ordained that it should be you and I, or nobody. And what must be must be I suppose. Hey, Milly? "If you like, Tony. You didn't really mean what you said to them?" "Not a word of it," declares Tony, bringing down his fist upon his palm.' Milly was a weak and stupid woman she should never of let him win ...read more.