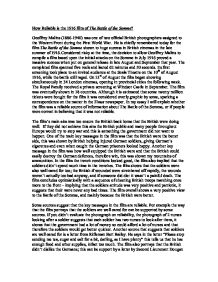 How Reliable is the 1916 film of The Battle of the Somme? Geoffrey Malins (1886-1940) was one of two official British photographers assigned to the Western Front

How Reliable is the 1916 film of The Battle of the Somme? Geoffrey Malins (1886-1940) was one of two official British photographers assigned to the Western Front during the First World War. He is chiefly remembered today for the film The Battle of the Somme shown to huge success in British cinemas in the late summer of 1916.Considered risky at the time, the decision to allow Geoffrey Malins to compile a film based upon the initial attacks on the Somme in July 1916 proved a massive success when put on general release in late August and September that year. The completed film spanned five reels and lasted 62 minutes and 50 seconds. Its first screening took place to an invited audience at the Scala Theatre on the 10th of August 1916, while the battle still raged. On 21st of August the film began showing simultaneously in 34 London cinemas, opening in provincial cities the following week. The Royal Family received a private screening at Windsor Castle in September. The film was eventually shown in 18 countries. Although it is estimated that some twenty million tickets were bought for the film it was considered overly graphic by some, sparking a correspondence on the matter in the Times newspaper. In my essay I will explain whether the film was a reliable source of information about The Battle of the Somme, or if people were correct in believing that it was not reliable. ...read more.

The film also portrays that the British didn't dislike the Germans; this can be support by a letter by Second Lieutenant Dougan Chater. In the letter he states on Christmas Day 1914 "about 10am today I was peeping over the parapet when I saw a German waving his arms and presently two of them got out of their trenches and came towards ours... in about two minutes the ground between the two lines of trenches was swarming the men and officers of both sides" The source suggests that the German and the British were equal and that their was no real hatred, and that the hatred was just exaggerated by the media - Nobody could of known what the Battle of the Somme was like better than a soldier who was fighting in it. Another key message in the film was British soldiers attitude to war - that they wanted too fight and had a good morale throughout. Two songs that they used to sing imply that they did have good morale because they were singing. On the other hand not all sources support the view of the film, for example an extract from the diary of Sergeant S.V Britten, from The Royal Highlands of Canada: He states that the trench conditions were awful and that soldiers were even using human bodies as sandbags. ...read more.

If the film were to show how the British really were getting on, they certainly would not have fake scenes in it. To make a fair judgement about the film you have to question the reliability of some of the sources I am using to support or to go against the film. Some sources can be biased and fake: The photograph of the soldiers blinded by a gas attack for example. There were no gas attacks in the Battle of the Somme and the photo was taken in April 1918, after the battle of Somme. The photo tells us that sources can be very unreliable at times. More evidence that sources can be unreliable are newspapers. William Beach Thomas reported about the Battle of the Somme for the daily mail and the daily mirror and says "that the great part of the information supplied by us by the British army was utterly wrong and misleading." Newspapers were reporting to the British public on how the army was "doing", and the film apparently had the same aim. If newspapers can lie like they did to the public, how can anyone not say that a film could not do the same? In conclusion I think that the film was fake and was propaganda because thee government wanted more soldiers to sign up, and to get the country backing the war democratically. If they country did this, Britain would probably win and become economically superior to other countries. ...read more.