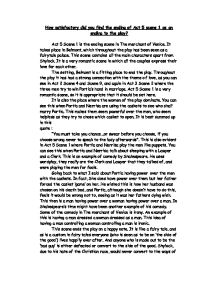 How satisfactory did you find the ending of Act 5 scene 1 as an ending to the play?

How satisfactory did you find the ending of Act 5 scene 1 as an ending to the play? Act 5 Scene 1 is the ending scene in The merchant of Venice. It takes place in Belmont, which throughout the play has been seen as a fairytale palace. This scene contains all the main characters apart from Shylock. It is a very romantic scene in which all the couples express their love for each other. The setting, Belmont is a fitting place to end the play. Throughout the play it has had a strong connection with the theme of love, as you can see in Act 2 Scene 4 and Scene 9, and again in Act 3 Scene 2 where the three men try to win Portia's hand in marriage. Act 5 Scene 1 is a very romantic scene, so it is appropriate that it should be set here. It is also the place where the women of the play dominate. ...read more.

This idea of having a man controlling a woman controlling a man is ironic. This scene ends the play on a happy note. It is like a fairy tale, and as is a custom in fairy tales everyone (who is seen as to be on 'the side of the good') lives happily ever after. And anyone who is made out to be the 'bad guy' is either defeated or convert to the side of the good. Shylock, due to his hate of the Christian race, would never convert to the ways of Antonio and others, so he is seen as defeated. This scene is like the fairytale I have just described in many ways. For one, all the couples of the play are together. That is Nerrisa and Grazziano, Lorenzo and Jessica and Bassanio and Portia. Antonio resumes his old distant, quiet personality and is again being a bit of a loner. ...read more.

To make it a happy ending Shakespeare introduced a lot of romance into the scene, mainly between Jessica and Lorenzo. On many occasions they compare their love to various characters of romance in Greek mythology. At one point they compare their love to Dido, who waited everyday on the sea banks waiting for her loved to return. However, in order not to over romanticise it, Shakespeare introduced a lot of humour into the scene. He introduced the ring story, which made the men very confused. Also, when Lorenzo and Jessica were challenging the strength of their love for each other, they start to insult each other. For example, Lorenzo says "on such a night, did Jessica, like a little shrew..." This was also a comedy element. In my opinion, I would have preferred the play to end after the court scene (Act 4 Scene 3) because it is a crescendo to the play. It is a dramatic scene with an exciting finish, that's how I would have liked it to end. Also, I feel that the final scene should contain the main character, Shylock. By Ben Luke 10G ...read more.