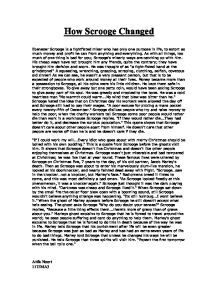 How Scrooge Changed Ebenezer Scrooge is a tightfisted miser who has only one purpose in life, to extort as much money and profit he can from anything and everything. As with all things, too much of one thing is bad for you; Scrooge's miserly ways are catching up with him. His cheap ways have not brought him any friends, quite the contrary; they have brought him derision and scorn. He was thought of as "a tight-fisted hand at the grindstone!" A squeezing, wrenching, grasping, scraping, clutching, selfish, covetous old sinner! As we can see, he wasn't a very pleasant person, but that is to be expected of people who work around money all their lives. Money became more than a possession to Scrooge, all his coins were his little children. He kept them safe in their strongboxes. To give away but one petty coin, would have been asking Scrooge to give away part of his soul. He was greedy and crooked to the bone. He was a cold heartless man "No warmth could warm...No wind that blew was bitter than he." Scrooge hated the idea that on Christmas day his workers were allowed the day off and Scrooge still had to pay their wages. "A poor excuse for picking a mans pocket every twenty-fifth of December." Scrooge dislikes people who try and raise money to help the poor, when the charity workers tell Scrooge some poor people would rather die than work in a workhouse Scrooge replies. ...read more.

He did not have to be concise, as that way he would be able to get his full meaning across. The statements' impact would be lowered if the sentences were to be shortened and fewer words were used e.g. 'Scrooge was a greedy, mean and cold-hearted person with no compassion for anything or anyone but himself!' It wouldn't get across just how vile Scrooge was. Dickens presents Scrooge's character to us throughout the novel in his many bad deeds, which show us what he is like. Dickens shows us scenes such the one in which Scrooge is cantankerous and grumpy with his clerk, "Let me here another sound from you, and you'll keep your Christmas by losing your situation!" and Fred his nephew. The next description of Scrooge character is "No eye at all is better than an evil eye, dark master!" This sentence helps to reinforce our views that Scrooge was mean-hearted. His bad looks were enough to inspire dislike towards him. The descriptions that Dickens uses are intense as they show the presentation of the character. Dickens goes into tremendous detail concerning the food around the Ghost of Christmas Present. He wants us to really be there, to taste the gravy, and smell the pies. He wants us to become part of the story, not just readers. Dickens uses powerful vocabulary to involve us. "Heaped up on the floor, to form a kind of throne, were turkeys, geese, game, poultry, brawn, great joints of meat, sucking-pigs, long wreaths of sausages, mince pies, plum-puddings, barrels of oysters, red-hot ...read more.

"Hear me! I am not the man I was!" Scrooge is finally showing some bit of humanity behind that polished and fraudulent fa�ade, as he learned to be happy; he learned to be sad. After the visits by the four ghosts Scrooge slowly started to change. After the visits he changed from being a person who doesn't care about anyone else but himself. He regrets that he didn't give a carol singer any money. After the visit of the ghost of Christmas present he realizes that he was wrong when he said that the poor people should just die to decrease the surplus population. He also realizes that if he actually bothers to go to his nephew Fred's house he would actually have a good time and enjoy himself. In the visit of the ghost of Christmas future Scrooge is shown both himself and Tiny Tim are going to die unless Scrooge can change. After the visits of all the ghosts, Scrooge wakes up on Christmas Day a new man. "I am as light as a feather...I am as happy as an angel." Scrooge goes out and buys a huge turkey and gives it to Bob Cratchit. Scrooge realizes that spreading happiness and being kind is far better than being a lonely old selfish man. At the beginning of the book Scrooge is a tight fisted heartless person but at the end he has changed and he's kind jolly and helps lots of people. Atifa Noori 11T/MA3 ...read more.