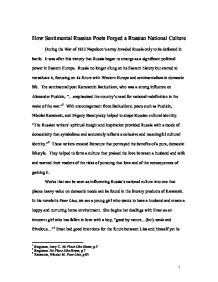 How Sentimental Russian Poets Forged a Russian National Culture During the War of 1812 Napoleon's army invaded Russia only to be defeated in battle. It was after this victory that Russia began to emerge as a significant political power in Eastern Europe. Russia no longer clung on its Eastern history but started to reevaluate it, focusing on its future with Western Europe and sentimentalism in domestic life. The sentimental poet Konstantin Batiushkov, who was a strong influence on Alexander Pushkin, "...emphasized the country's need for national redefinition in the wake of the war."1 With encouragement from Batiushkov, poets such as Pushkin, Nikolai Karamzin, and Evgeny Baratynsky helped to shape Russian cultural identity. "The Russian writers' spiritual insight and inspiration provided Russia with a mode of domesticity that symbolizes and accurately reflects a cohesive and meaningful cultural identity."2 These writers created literature that portrayed the benefits of a pure, domestic lifestyle. They helped to form a culture that praised the love between a husband and wife and warned their readers of the risks of pursuing that love and of the consequences of gaining it. Works that can be seen as influencing Russia's national culture into one that places heavy value on domestic needs can be found in the literary products of Karamzin. In his novelette Poor Liza, we see a young girl who wants to have a husband and create a happy and nurturing home environment. ...read more.

Pyotr was not forced physically to write the song but he was forced to write the song because of his emotional ties to her. This is the type of culture that the poets aforementioned were trying to create for the whole of Russia. A culture that needs, wants, and cannot live without a pure, loving, domestic household. After Pyotr had decided to marry Masha he wrote a letter to his parents asking for their blessing. Masha was hesitant about their marriage because she felt that Pyotr's parents would object to it. Pyotr then states, "I had no doubts of my mother's kindness; but knowing my father's views and disposition, I felt that my love would not particularly touch him..."11 Pyotr's mother's feelings stay true to what Pushkin and the other poets mentioned would like the Russian culture to become. Pyotr's father, Andrey Grinyov, believed that his son should marry a woman from their own social class and therefore gain a large dowry in the marriage. "I do not intend to give you either my blessing or my consent...(you are) a naughty boy for your pranks, not regarding your officer's rank..."12 Andrey was disgraced that Pyotr would even think of marrying a woman below his social standing and was very upset with Pyotr for having the nerve to write him a letter asking for his consent. As punishment for this his father wanted to send Pyotr off to "...some remote place"13 where Pyotr could get over his infatuation and grow up into the kind of man his father envisioned his becoming. ...read more.

These two authors are trying to show the realistic Russian male that when presented with a woman you know will make you happy; pursue her and do not worry about marrying for practical purposes or for any reason other than love. After Russia's victory in the War of 1812 some of the intellectuals of the time thought that Russia needed to reshape its culture. As can be seen in some of the works of Karamzin, Baratynsky, and Pushkin, they believed that Russia should adopt a culture that values a pure domestic life above all else. The main characters in Poor Liza could not enjoy this lifestyle due to the way that Erast treated Liza. Baratynsky's poem Confession and Pushkin's novel Eugene Onegin showed how much anguish was caused to the main male characters because of lost loves. Pushkin's novel, The Captain's Daughter, gives a more sentimental outlook to its main male character but even Pyotr has to convince his father that he should marry for love and not for practical reasons. In Pushkin's untitled poem he is trying to create a scene that shows the nature of Russian peasant women and is idealizing it so other woman will aspire to it. The authors of these works mentioned hope that Russian men, and in some instances Russian urban women, who read their works will hopefully begin to understand the value of a pure and loving domestic life. These writers along with the influence of Batiushkov attempted to reshape Russia's culture by creating literature that portrayed domestic life in a positive light. ...read more.