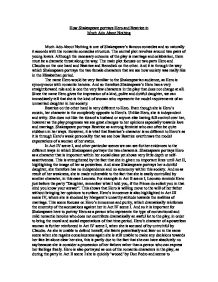 How Shakespeare portrays Hero and Beatrice in Much Ado About Nothing.

How Shakespeare portrays Hero and Beatrice in Much Ado About Nothing Much Ado About Nothing is one of Shakespeare's famous comedies and so naturally it accords with the romantic comedies structure. The central plot revolves around two pairs of young lovers. Although the necessary outcome of the play is marriage and celebration, there must be a dramatic threat along the way. The main plot focuses on two parts Hero and Claudio on the one hand and Beatrice and Benedick on the other. And it is through the way which Shakespeare portrays the two female characters that we see how society was really like in the Elizabethan period. The name Hero would be very familiar to the Shakespearian audience, as Hero is synonymous with romantic heroine. And so therefore Shakespeare's Hero has a very straightforward role and is one the very few characters in the play that does not change at all. Since the name Hero gives the impression of a kind, polite and dutiful daughter, we can immediately tell that she is the kind of woman who represents the model requirements of an unmarried daughter in her society. Beatrice on the other hand is very different to Hero. Even though she is Hero's cousin, her character is the completely opposite to Hero's. Unlike Hero, she is independent and witty. She does not like the idea of a husband or anyone else having full control over her, however as the play progresses we see great changes to her opinions especially towards love and marriage. ...read more.

This can be seen at the end of Act IV scene I, when Benedick refuses to kill Claudio for her, she immediately says that his love for her isn't true as can be seen in this next quote - "I am gone though I am here; there is no love in you." From this example we can see that Beatrice seem to think that love is so overwhelming that if Benedick truly loved her then he will kill for her and if he doesn't then love is truly as false as she originally thought. And so throughout the play of Much Ado About Nothing Beatrice is portrayed as a character who stands for the right of women. She questions the conventional role played by women, which is to be taken for granted by men and stands out as a character of conviction and is overall an unforgettable heroine in the context of Shakespearean love stories. Since Much Ado About Nothing is a romantic comedy, the primary focus is obviously on love and marriage. However, even though love and marriage was a major idea in Elizabethan England, Shakespeare presents to us different views and perspectives on the matter through the two female characters. From the two main couples in this play we can understand their different views on commitment throughout the play and because of this the audience is able to learn what Elizabethan England expected from young women and what women were really like. And so it is of paramount importance that Shakespeare portrays the characters of Hero and Beatrice so differently and allow them to each contribute dramatically to the play in their own ways. ...read more.

Another example is right at the end of the play, when the audience knows about the plan to marry Hero to Claudio as Hero's identical looking cousin. Dramatic irony plays a great part throughout the book as well as to the theme of noting. It seems to by intended by Shakespeare to signal the importance of observation, spying and eavesdropping in the play; in addition to that he then uses the problems of illusion, deception and subjectivity of perception to examine the Elizabethan patriarchy Shakespeare was born in early 1564 in Stratford-on-Avon in England. He was born to a glove maker and a family of eight, him being the third. Since, his father later became the town's mayor, Shakespeare was able to study in the local grammar school and probably hunted and played sports in the open fields behind his home. By 1592, Shakespeare was married with three children and living in London where he was busy acting in plays and writing his own dramas. After the plague, during which he wrote a number of famous poems, Shakespeare moved onto writing all thirty-seven of his credited plays some of which were performed in the Globe Theatre. After 1608, it appears he went into semi-retirement, spending more time in Stratford and creating only five plays before his death on April 23, 1616. Much Ado About Nothing was written in the middle years of Shakespeare's career, during the Elizabethan period. By then he had already established himself as a dramatist. The play has fewer elements when compared with some of Shakespeare's other comedies. The setting here is drawn to resemble the world of the Elizabethan nobles although the language can sometimes by pretty ordinary, despite the witty dialogue in certain scenes. ...read more.