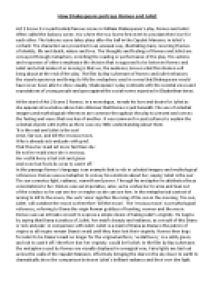 How Shakespeare portrays Romeo and Juliet in Act 2 Scene 2

﻿How Shakespeare portrays Romeo and Juliet Act 2 Scene 2 is a particularly famous scene in William Shakespeare?s play, Romeo and Juliet. Often called the balcony scene, it is where the two lovers first meet to proclaim their love for each other. The balcony scene takes place after the ball in the Capulet Mansion, in Juliet?s orchard. The characters are presented in an unusual way, illustrating many recurring themes of identity, life and death, nature and love. The thoughts and feelings of Romeo and Juliet are conveyed through metaphors, enriching the reading or performance of the play. The actions and responses of others emphasize the division that is supposed to be between Romeo and Juliet and what makes it so moving is that we, the audience, knows what this division will bring about at the end of the play. The film by Baz Luhrmann of Romeo and Juliet enhances the visual experience and brings to life the metaphors used in a way that Shakespeare would have never been able to show visually. Shakespeare?s play contrasts with the societal views and expectations of young people and goes against the social norms expected in Elizabethan times. At the start of Act 2 Scene 2 Romeo, in a monologue, reveals his love and desire for Juliet as she appears at a window above him oblivious that Romeo is just beneath. ...read more.

?Love?s wings? connotes angels and divinity and birds as well, it is like saying that god gave him the power to climb or ?fly? over the wall to try and get him to meet Juliet. ?Perch? connotes birds; after he ?flew? or climbed over the wall he perched on the top so metaphorically he is a bird. His ?bird instincts? are then telling him to try and find and attract a mate and here Romeo is doing just that. Everything Romeo says is in iambic pentameter, giving a song-like feeling to it, just like a bird singing to impress his mate. There are further examples through the play. This example is expressed by Juliet this time, not Romeo: ?Hist! Romeo, hist! O, for a falconer?s voice, To lure this tassel-gentle back again!? Here, Juliet portrays Romeo as a bird. She is the falconer that can command Romeo at any time she wants. Romeo is described as a ?tassel-gentle? which is male hawk; this connotes and attributes power, nobility and mightiness to him. Juliet?s dominance is shown by the fact that she can call out to her Romeo at any time and he will come. ??Tis almost morning; I would have thee gone: And yet no further than a wanton?s bird; Who lets it hop a little from her hand, Like a poor prisoner in his twisted gyves, And with a silk thread ...read more.

Distortion is a theme conveyed throughout the Act 2 Scene 2; in fact the whole play could be viewed as a distortion. Juliet?s world being distorted to make her hate the Montagues, Romeo and Juliet?s world compared to the places beyond the orchard wall and the views of the two families on the love between Romeo and Juliet. The distortion is emphasized when the Nurse interjects perhaps to illustrate and reinforce Juliet?s challenge to stereotype. Referring back to the previous paragraph, bubble around Juliet distorts her view on Romeo, the view she was forced to accept by her family; now Romeo is in the same bubble so she can see clearly; the nurse then comes and pierces this bubble revealing this act of rebellion. Later in the play and the film when she refuses to marry Paris and her father?s temper grows, it is the nurse who supports Juliet. In the film this distortion is portrayed visually in different ways. When the nurse appears, shots get further away, reminding us that there are things around Romeo and Juliet; however the things around Romeo and Juliet are out of focus, emphasizing the half asleep state mentioned in the previous paragraph. Furthermore, when Romeo and Juliet are standing in the swimming pool, the light being refracted by the water makes their legs shorter compared to the rest of their bodies. ...read more.

This is very good analysis and shows a good understanding of the characters; however the essay attempts to cover a lot of points about the film and the text and the anlaysis becomes unfocused. There are some good comparisons made but a very specific plan is needed when looking at two different genres and trying to compare them. It is also important when analysing a key scene that links are made with the rest of the play.