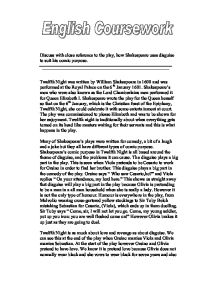 how Shakespeare uses disguise to suit his comic purpose

Discuss with close reference to the play, how Shakespeare uses disguise to suit his comic purpose. Twelfth Night was written by William Shakespeare in 1600 and was performed at the Royal Palace on the 6th January 1601. Shakespeare's men who were also known as the Lord Chamberlains men performed it for Queen Elizabeth I. Shakespeare wrote the play for the Queen herself so that on the 6th January, which is the Christian feast of the Epiphany, Twelfth Night, she could celebrate it with some entertainment at court. The play was commissioned to please Elizabeth and was to be shown for her enjoyment. Twelfth night is traditionally about when everything gets turned on its head like masters waiting for their servants and this is what happens in the play. Many of Shakespeare's plays were written for comedy, a bit of a laugh and a joke but they all have different types of comic purpose. Shakespeare's comic purpose in Twelfth Night is all based around the theme of disguise, and the problems it can cause. The disguise plays a big part in the play. This is seen when Viola pretends to be Cesario to work for Orsino in order to find her brother. This disguise plays a big part in the comedy of the play. Orsino says " Who saw Cesario,ho?" and Viola replies " On your attendance, my lord here." This shows us straight away that disguise will play a big part in the play because Olivia is pretending to be a man in a all man household when she is really a lady. However it is not the only type of humour. Humour is everywhere in the play, from Malvolio wearing cross-gartered yellow stockings to Sir Toby Belch mistaking Sebastian for Cesario, (Viola), which ends up in them duelling. Sir Toby says " Come, sir, I will not let you go. Come, my young soldier, put up you iron: you are well fleshed come on!" ...read more.

To do this she has to use disguise. She uses disguise because in Orsino's household, which is the only place she can get work, there is only men allowed to work there. Why she has to disguise herself is because she has been shipwrecked along with her brother, but she believes her brother to be dead and so has to get a job in Illyria to settle herself and find out things. So she dresses up as a man called Cesario and deceits Orsino to be able to work in his household. We know this disguise works straight away because Orsino sends Cesario to Olivia's courtyard. He says to Cesario " Therefore, good youth, address thy gait unto her, be not denied access, stand at her doors." So we know her disguise has worked to work for Orsino because he sends her on a job to try and talk to Olivia and tell her how much Orsino loves her. Also in Act 1 the friendship between Sir Toby and Sir Andrew is fake. We can see this straight away when Sir Toby is speaking to Maria about Sir Andrew. He says, " He's as tall a man as any's in Illyria" Here Maria replies " What's that to th' purpose?" and Sir Toby replies "Why, he has three thousand ducats a year." This shows us that Sir Toby only really cares about Sir Andrew money and nothing else. As the play goes on we realise why Sir Andrew has come to stay with Sir Toby, and it is because Sir Toby said to Sir Andrew that if he comes Sir Toby will do everything he can to set him up with Olivia, but all Sir Toby really wants is to use his money to spend on drinking and going out and having a good time. The audience however knows Sir Andrew has no chance with Olivia once she falls in love with who she thinks is Cesario, and Sir Andrew realises this but Sir Toby persuades him to stay. ...read more.

Disguise plays a final role in the play in Act four when Feste, Olivia's fool, dresses up as a priest called Sir Topas and disguises himself to drive a man mad and that man is Malvolio, because Sir Topas is not real. Feste goes to the palce where Malvolio is locked up and because it is not very light his disguise works. Malvolio says to him "Sir Topas, Sir Topas, Sir Topas, good Sir Topas, got to my lady!" and then Feste replies pretending to me Sir Topas, "Out, hyperbolical fiend! How vexest thou this man! Talkest thou nothing but of ladies?" Feste winds up Malvolio to the time that Malvolio himself thinks he is going mad. In Act Five disguise is abandoned all together. Firstly Cesario is back to Olivia. Sir Toby tells Sir Andrew that he is no friend of his. Sir Andrew then admits that he is no good and is a coward. Both Olivia and Orsino realise they can properly love. Olivia falls in love with Sebastian and Orsino falls in love with Viola, and they have a joint wedding. Feste then admits to Malvolio that he was really Sir Topas, and that he is not mad. Disguise in the play leads to a lot of mistaken identity and it also hides the truth of people in real situations. Finally during the play Shakespeare uses disguise to suit his comic purpose because it brings about a lot of different reactions and a lot of different things can happen when people pretend to be someone else or someone they aren't. He uses disguise very effectively to create jokes and humour. We see this when Feste is about to duel with Sebastian when Olivia intervenes and starts kissing Sebastian and Sebastian can not believe it because he has never seen this lady before. Also it brings laughs when Malvolio tries to get into bed with Olivia wearing cross-gartered yellow stockings when she really thinks he looks ridiculous. Overall Shakespeare uses disguise very well to create a comedy for Elizabeth's entertainment. ...read more.