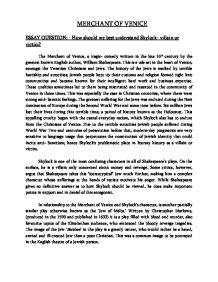 How should we best understand Shylock- villain or victim?

MERCHANT OF VENICE ESSAY QUESTION: - How should we best understand Shylock- villain or victim? The Merchant of Venice, a tragic- comedy written in the late 16th century by the greatest known English author, William Shakespeare. This is a tale set in the heart of Venice, amongst the Venetian Christians and Jews. The history of the Jews is marked by terrible hardship and atrocities; Jewish people kept up their customs and religion formed tight knit communities and became known for their intelligent hard work and business expertise. These qualities sometimes led to them being mistrusted and resented in the community of Venice in those times. This was especially the case in Christian countries, where there were strong anti- Semitic feelings. The greatest suffering for the Jews was endured during the Nazi domination of Europe during the Second World War and some time before. Six million Jews lost their lives during this terrible time; a period of history known as the Holocaust. This appalling cruelty began with the casual everyday racism, which Shylock also has to endure from the Christians of Venice. Due to the terrible atrocities Jewish people suffered during World War Two and centuries of persecution before that, modern-day pragmatics are very sensitive to language usage that perpetuates the construction of Jewish identity that could incite anti- Semitism; hence Shylock's problematic place in literary history as a villain or victim. Shylock is one of the most confusing characters in all of Shakespeare's plays. ...read more.

O my daughter! Fled with a Christian! O my Christian ducats! Justice! the law! my ducats, and my daughter!' Is Shylock more worried about his daughter or more worried about his ducats? If you were biased then you would most probably say that Shylock is more anxious about his money; mostly because he is associated with being money-hungry and villainous man, even so, in the quote Shylock cries out 'My daughter!' at the beginning of the quote and even at the end finishes with 'and my daughter!,' so from and unbiased point of view Shylock could be grieving over the loss of his daughter to a Christian, and although he is disappointed about his jewels, his is going through mixed emotions, and therefore bringing it back to the point that he might just want Antonio's flesh not only because he is a Christian, but also to revenge the fact that his daughter ran away with a Christian; Shylock as we know in the play, acts appallingly to Christians because he is at war with them, which makes him look like a villain however after all opponents/ enemies always believe that other is obnoxious. Characters in the play which portray Shylock as a villain are most unquestionably the Christians. Shylock is made to sound like a complete criminal in the 'court scene,' where he is addressed as a convicted scandal (when it should be Antonio in trial), only because he wants what he right fully deserves in the bond drawn up with Antonio; what is the reason for this? ...read more.

The loss of his wife; his daughter running away; his precious jewels being stolen, and an outcast of the society; over and over again he seems to endure a new type of persecution; as one problem passes another seems to comes along - just like the weather it is completely unpredictable, and it is unknown how much damage it will do, but it is known fact that it will always leave a scar, which makes Shylock the person he is- a destroyed cold hearted man. Considering all the points above, and keeping in acknowledgment that the book was written almost five centuries back, I would say that Shylock wasn't a villain, but a victim who was forced to have some villainous qualities to survive in the 'game' of life. To be able to judge Shylock you have to be very open-minded; his individuality is what makes him the person he is- you cannot judge him unless you put yourself in his shoes and try to understand what it must feel like day after day to endure what he had to, and yet still there will be many questions left unanswered. Shylock exhibits qualities of both a villain and victim, but I myself cannot say he is one over the other. I believe a person does everything for a specific reason, which is somehow related to past motives, surroundings, people and this can be said for Shylock, therefore Shylock is neither villain nor victim, or he is both victim and villain. ...read more.