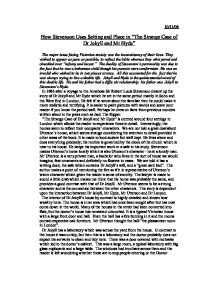 10/11/08 How Stevenson Uses Setting and Place in "The Strange Case of Dr Jekyll and Mr Hyde" The major issue facing Victorian society was the inconsistency of their lives. They wished to appear as pure as possible, to reflect the bible whereas they whispered and chuckled over "infamy and incest." The duality of Stevenson's personality was due to the fact that he was a bohemian child though his parents were conformists .He was an invalid who wished to be in two places at once. All this accounted for the fact that he was always trying to live a double life. Jekyll and Hyde is the quintessential novel of this double life. He and his father had a difficult relationship: his father was Jekyll to Stevenson's Hyde. In 1886 after a voyage to the Americas Sir Robert Louis Stevenson dreamt up the story of Dr Jekyll and Mr Hyde which he set in the same period mainly in Soho and the West End in London. He felt if he wrote about the familiar then he could make it more realistic and terrifying. It is easier to paint pictures with words and scare your reader if you know the period well. Perhaps he drew on facts from previous murders written about in the press such as Jack The Ripper. "The Strange Case of Dr Jekyll and Mr Hyde" is centred around four settings in London which allows the reader to experience these in detail. ...read more.

This would gradually change as tradesmen developed their businesses and were able to raise themselves from the misery of the overcrowded slums, particularly in the east end. Stevenson came from a wealthy family, and he writes the story from the viewpoint of Mr Utterson who is a lawyer. This means that he would certainly not be poor and provides Stevenson with a comfort level from which he can write in a familiar way. The main events of the story take place in Soho, which is very close to the wealthier West End. Even today it is an area of narrow winding lanes, inhabited by people of varying nationalities and I think is very much working class, full of restaurants, drinking establishments and houses of ill repute. Back in the late nineteenth century it was not very different from this. There would have been poor people on the streets selling goods, 'many ragged children huddled in doorways'. The London smog which was a well known factor of the London of the nineteenth century 'cut him off from his blackguardly surroundings'. These are very powerful words indeed, leaving the reader with no doubt about what the area was like. The smog (fog and smoke), meant that it was often impossible to see much more than a couple of feet in front of you, and led to horrendous health problems with respiratory diseases. It was very useful for crime, because the thief could escape without being identified and once they entered the maze of streets it was easy to lose a pursuer who was not familiar with the area. ...read more.

He fails which begs the question can we stop ourselves becoming evil? Without place and setting this novel would not be nearly so successful, and therefore would not have become the classic it is today. Most people have heard of Jekyll and Hyde and have a vague idea of who they are, sadly not so many have read the book. The remarkable thing is that these are well known representative characters for good and bad even though these people may not have read the book. The reader is introduced to the sinister nature of the story very quickly, and Mr Utterson soon becomes the detective 'if he be Mr Hyde' he had thought 'I shall be Mr Seek'. In order for the book to succeed so well it must have been meticulously planned, the interaction of the characters and revelation of the clues. Even when you read the book for the first time and you know who Jekyll and Hyde are, it is still a voyage of discovery and wonder to see if they will both die at the end. We know at the beginning that there will be something nasty to follow when Dr Jekyll tells Mr Utterson that 'this is a private matter, and I beg of you to let it sleep', and so the sorry tale unfolds. This was the first instance of man evolving into a monster with the aid of a drug, and led to horror stories and films of werewolves etc. worldwide. "What a lesson I have had!' And he covered his face for a moment with his hands. Dominic Lawrence ...read more.