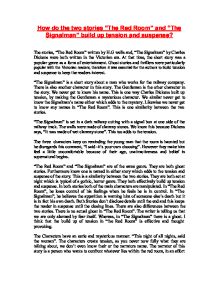 How tension Is built Up in short stories

How do the two stories "The Red Room" and "The Signalman" build up tension and suspense? The stories, "The Red Room" written by H.G wells and, "The Signalman" by Charles Dickens were both written in the Victorian era. At that time, the short story was a popular genre as a form of entertainment. Ghost stories and thrillers were particularly popular with the Victorian readers, therefore it was essential for the authors to build tension and suspense to keep the readers interest. "The Signalman" is a short story about a man who works for the railway company. There is also another character in this story. The Gentleman is the other character in the story. We never get to know his name. This is one way Charles Dickens built up tension, by making the Gentleman a mysterious character. We similar never get to know the Signalman's name either which adds to the mystery. Likewise we never get to know any names in "The Red Room". This is one similarity between the two stories. "The Signalman" is set in a dark railway cutting with a signal box at one side of the railway track. The walls were made of clammy stones. We know this because Dickens says, "It was made of wet clammy stone". This too adds to the tension. The three characters keep on reminding the young man that the room is haunted but he disregards this comment, "I said -it's your own choosing". ...read more.

I said. "Did I do that myself in a flash of absentmindedness?" ' This is an example of the rational side of the protagonist. In 'The Signalman' the signalman eventually becomes so unsettled by the apparitions that his mind would not work properly. ' "As the engine came out of the tunnel, his back was towards her", This proves that the signalman was distressed. Even though he could have easily avoided the train having enough time to react, he let it hit him. An obvious technique used in every Gothic short, is the use building the tension. The language and sentence structure used builds the tension by cliffhanging the ending. It uses a lot of repetition to emphasize something in the story. In 'The Red Room', H.G.Wells makes many inferences throughout the story to shadows. "...and my candle flared and made the shadows cower and quiver. The echoes ran up the stairs and a shadow came sweeping down after me." This description personifies the shadows and forebodes that something inanimate, a concept perhaps will be personified later in the story. He also uses repeated actions rather than just descriptions. "I walked back, relit one, and as I did so, I saw the candle in the sconce right of the mirror wink and go out. The shadows seemed to take another step towards me." This happening demonstrates the use of repetition with two separate ideas, an action and a description. ...read more.

We are told that there is no ghost at all but something far greater, "...there is no ghost there at all, "and that is, in all its nakedness - Fear," which implies there is nothing supernatural in our world, just us and our minds playing tricks upon us. It is very alike to. The ending returns to the opening, where we are still left wondering what it is about the red room that makes it so scary and feared, "...many things to see and sorrow for". The ending also implies that there will always be a mystery and the haunted red room won't be gone unless the house is gone and it has been demolished. Both these stories provide us with an unusual but enticing story, very different but both linked to Gothic literature and both leaving us with so many unanswered questions. They tackle these stories using devices which captivate us and make us want to read on; both use the same devices throughout the story but in different contexts. Within the two short stories, the opening engages us immediately and the open ending leaves us wondering and thinking about the tale for a long time. An uneasy atmosphere takes over, he also creates mystery by making the reader wonder why he has a withered arm and whether it is anything to do with the red room. The man with the bad back is similar to the man with the withered arm by making the reader ask himself or herself how he got it Will Pinnell SLH ...read more.