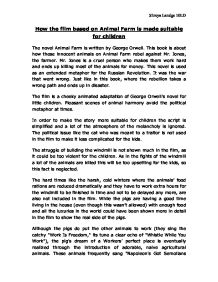 How the film based on Animal Farm is made suitable for children The novel Animal Farm is written by George Orwell. This book is about how these innocent animals on Animal Farm rebel against Mr. Jones, the farmer. Mr. Jones is a cruel person who makes them work hard and ends up killing most of the animals for money. This novel is used as an extended metaphor for the Russian Revolution. It was the war that went wrong. Just like in this book, where the rebellion takes a wrong path and ends up in disaster. The film is a cheeky animated adaptation of George Orwell's novel for little children. Pleasant scenes of animal harmony avoid the political metaphor at times. ...read more.

While the pigs are having a good time living in the house (even though this wasn't allowed) with enough food and all the luxuries in the world could have been shown more in detail in the film to show the real side of the pigs. Although the pigs do put the other animals to work (they sing the catchy "Work Is Freedom," its tune a clear echo of "Whistle While You Work"), the pig's dream of a Workers' perfect place is eventually realized through the introduction of adorable, naive agricultural animals. These animals frequently sang "Napoleon's Got Semolians Now", thinking that the pigs were always right. But none of the animals ever saw the real side of the pigs, till the end. ...read more.

for the power of the farm is reduced in the film to make it more suitable for the kids and at the same time making it simpler. In the end, the theme of the story is softened slightly by adding an epilogue where the other animals successfully revolt against the pigs. The ending here is completely changed as it cannot be used for children's films. This is because children's stories always end in a happy ending. Although readers of the book may be put off by of Orwell's political message the film makes it more interesting by visual and sound aids. The little chick makes it funny, as it is different from the other animals. The humorous rollicking songs such as "Four Pig's Feet," "Snowball in Heaven's Chance" and "Work is Freedom" make it a good time for the kids and adds to the humour of the film. Shreya Landge 10LD ...read more.