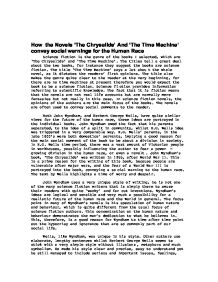 How the Novels 'The Chrysalids' And 'The Time Machine' convey social warnings for the Human Race Science fiction is the genre of the books I selected, which are 'The Chrysalids' and 'The Time Machine'. The titles tell a great deal about the two books, for instance they suggest the books are science fiction. The title 'The Time Machine' says a lot about the whole novel, as it dictates the readers' first opinions. The title also makes the genre quite clear to the reader at the very beginning, for there are no time machines at present therefore you would expect the book to be a science fiction. Science fiction provides information referring to scientific knowledge. The fact that it is fiction means that the novels are not real life accounts but are normally mere fantasies but not really in this case. In science fiction novels, the opinions of the authors are the main focus of the books. The novels are often used to convey social comments to the reader. Both John Wyndham, and Herbert George Wells, have quite similar views for the future of the human race, these ideas are portrayed in the individual books. John Wyndham owed the fact that his parents separated, to the idea of a split in community, whilst H.G. Wells idea was triggered in a very comparable way. H.G. Wells' parents, in the late 1800's were both domestics' servants, implying a good reason for the main social comment of the book to be about a division in society. In H.G. Wells time period, there was a vast amount of Victorian people in workhouses, possibly influencing the author to fear a power - growing division in the human race, or even a revolt. John Wyndham's book, 'The Chrysalids' was written in 1955, after World War II. This is a prime reason for the writing of this book, because people are vulnerable after major wars, and the fear of a World War III is portrayed into the book, conveying a social warning to the human race. ...read more.

Then the time started to move more quickly. The laboratory disappeared. When he stopped the machine, he was in a type of garden in a New World, which was 802701. The New World that the Time Traveller stumbled upon was straight away examined by the Time Traveller and the first thing the man noticed which emphasised the point a great deal, was that the human race was split into two parts, the Eloi and the Morlocks. The Eloi firstly saw him, and they found him interesting. He was taken to a building and could eat, showing this species friendliness which they showed back. When they lost interest he discovered his Time Machine is missing. He believed it was put in a White Sphinx (A rather large white statue), but before he could find the Time Machine he rescued a little female Eloi, Weena. She appreciated it and followed him everywhere. He discovered vaguely how the world worked. During the time he was in the forest with Weena. They were suddenly surrounded by Morlocks, showing there beastliness and cruelty, and it was getting late, emphasising how scared little Weena and the Time Traveller were becoming. He had built a campfire. He only escaped because the forest was burning, but he lost Weena. The Time Traveller went to the White Sphinx and started destroying it. He could now enter it and he saw his beloved Time Machine. When he approached it he discovered it was a trick to get him there by the evil Morlocks. Quickly he jumped in the Time Machine and disappeared. He stopped 30 million years later. The earth had completely changed and all intelligent creatures had disappeared. All this shows how drastic Wells' ideas are, showing that he thinks the split will just keep on increasing with time, until all species are destroyed. Then he returned to our time. The Time Traveller told the group of people of his epic story, and left them to believe it if they wanted to. ...read more.

"Why should they be afraid of us? We aren't hurting them," she broke in. "I'm not sure," I told her. "But they are...the more stupid they are, the more like everyone else they think they ought to be. And once they get afraid, they become cruel and want to hurt people who are different...they'd hurt us very much if they caught us... It's the way things work. It's complicated and rather nasty." In the Waknuk community, there are reminders of the Norm everywhere. Signs and plaques state "BLESSED IS THE NORM" and "WATCH THOU FOR THE MUTANT" this indicates what is successfully conveyed in both novels, that we are being constantly reminded of how we "should" be and what we "should" do. Immediate prayer is required from all those who are disrespectful of the Norm. However, the problem is that what the Waknuk people consider normal is not necessarily normal for all communities. 'The value of a man's life should not be determined by his looks', is what is shown in the books, put perfectly by the New Testament. It should be his heart and his values. As Wyndham points out, fitting a certain description does not make a man a truly good person. 'The Chrysalids' and 'The Time Machine' put the same points across to the reader yet very differently, the Wyndham approach is direct and gets to the point straight away, whereas Wells goes for the less direct path and still makes the warnings clear. The novels are enjoyable, they let the reader take pleasure from the books but then work out, realise, understand and seriously think about the explicit and implicit meanings. The authors did very well to make the science fiction books so serious and thought provoking, and contain excitement. For most of the usual sci-fi genres are simply books very far fetched with the main plots being 'space warps' whereas 'The Chrysalids' and 'The Time Machines' have the seriousness of social comments and warnings. I enjoyed reading 'The Time Machine' and 'The Chrysalids' respectively. ...read more.