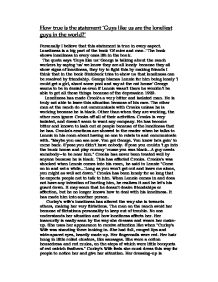 How true is the statement Guys like us are the loneliest guys in the world?(TM)

How true is the statement 'Guys like us are the loneliest guys in the world?' Personally I believe that this statement is true in every aspect. Loneliness is a big part of the book 'Of mice and men.' The book shows loneliness in every ones life in the book. The quote says 'Guys like us' George is talking about the ranch workers by saying 'us' we know they are all lonely because they all show signs of loneliness, they try to fight this by making friends I think that in the book Steinbeck tries to show us that loneliness can be resolved by friendship. George blames Lennie for him being lonely 'I could get a girl, shoot some pool and say at the cat house' George seems to be in denial as even if Lennie wasn't there he wouldn't be able to get all those things because of the depression 1929. Loneliness has made Crook's a very bitter and isolated man. ...read more.

The men on the ranch avoid her because of flirtatious personality to keep out of trouble. No one understands her situation and how loneliness affects her. Her insecurity is easily seen by the way she dresses and wears her make-up. She uses her appearance to receive attention like when "Curley's Wife was standing there looking in. She had full, rouged lips and wide-spaced eyes, heavily made up. Her fingernails were red. Her hair hung in little rolled clusters, like sausages. She wore a cotton housedress and red mules, on the steps of which were little bouquets of red ostrich feathers." Curley's Wife feels she must dress this way for people to notice her and give her attention. Her dressing-up is unnecessary because they live on a farm and this is not the typical or practical clothing. The way she dresses proves her insecurity and her lack of confidence. Curley's Wife dresses inappropriately along with acting in flirtatious ways. This is another attempt for the attention she believes she does not get. ...read more.

Lennie's feelings and emotions are portrayed to the reader when he sees the rabbit and Aunt Clara. He says: "I tried Aunt Clara, ma'am. I tried. I couldn't help it...I'll go right off in the hills an' I'll fin' a cave an' I'll live there so I won't be no more trouble to George." Lennie was basically in denial of his own loneliness. Loneliness has made Lennie want a better life for himself. This involves these soft items and the dream for his and George's farm. He believes at the farm he will not have to deal with all the problems that he has now. Lennie became unrealistic in many ways because of both his condition and his loneliness. Lennie most likely would have never got the farm or the soft items even if he wasn't killed, but his loneliness acts as motivation for these goals. In conclusion to this, yes I do think the statement 'Guys like us are the loneliest guys in the world' is true because loneliness is seen in all the ranch workers life's, as I've just proved. ...read more.