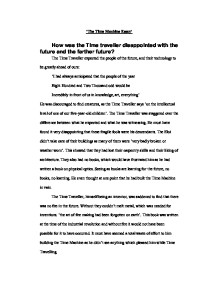 How was the Time traveller disappointed with the future and the farther future?

'The Time Machine Essay' How was the Time traveller disappointed with the future and the farther future? The Time Traveller expected the people of the future, and their technology to be greatly ahead of ours: 'I had always anticipated that the people of the year Eight Hundred and Two Thousand odd would be Incredibly in front of us in knowledge, art, everything' He was discouraged to find creatures, as the Time Traveller says 'on the intellectual level of one of our five-year-old children'. The Time Traveller was staggered over the difference between what he expected and what he was witnessing. He must have found it very disappointing that these fragile fools were his descendants. The Eloi didn't take care of their buildings as many of them were 'very badly broken or weather worn'. This showed that they had lost their carpentry skills and their liking of architecture. They also had no books, which would have frustrated him as he had written a book on physical optics. ...read more.

He compares them to spiders worms and even vermin. Things which people usually find creepy. When The Time Traveller talks about the Morlocks the author tries to create fear through metaphors. 'It was so like a human spider! / these whitened Lemurs, this new vermin'. As the Morlocks stole his Time Machine, it worsened his hate towards them adding to the fact that they eat the Eloi. Unlike the Eloi the Morlocks seemed in better shape [physically] which was discouraging to the Time Traveller as it would make his task of repossessing the Time Machine much more difficult. After he looked at the natural history gallery the Time Traveller became downcast. This was because all of the things in the gallery were damaged over time. He wouldn't have been able to see what happened over the years to the environment and to nature. After travelling thousands of years through time he was looking forward to making observations and what was left in the gallery did not reach his expectations: 'I was sorry for that, because I should have been glad to trace the patient readjustments by which the conquest of animated nature had been attained.' ...read more.

And without the Time Machine he would be trapped in a strange new world feeling lonely and home sick: 'I began to think of this house of mine, of this fireside, of some of you, and, with such thoughts came a longing that was pain.' In the farther future the Time Traveller is again disappointed. When he stopped and landed on the beach he found no wind, waves or trees which would have made him feel desolate. All he sees is moss, 'the uniform poisonous lichen green' which gives the impression that he doesn't like it. All the natural things he would have been used to were gone. 'I cannot convey the sense of abominable desolation that hung over the world.' Which shows that he felt lonely in that dark world. When he went another thousand years ahead, the crabs he saw before were gone. Only the lichens were alive, 'save for its livid green liverworts and lichens seemed lifeless' is what he saw of the world. It would have been saddening to the Time Traveller seeing the world he had come to love, dead, with only moss on the surface. ...read more.