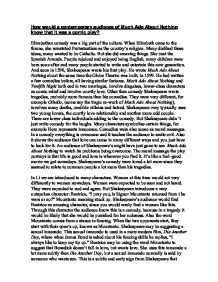 How would a contemporary audience of Much Ado About Nothing know that it was a comic play?

How would a contemporary audience of Much Ado About Nothing know that it was a comic play? Elizabethan comedy was a big part of the culture. When Elizabeth came to the throne, she reinstated Protestantism as the country's religion. Many disliked these ideas, many wanted to be Catholic. But she did amazing things. She beat the Spanish Armada. People rejoiced and enjoyed being English, many children were born soon after and many people started to write and entertain this new generation. And soon in 1590, Shakespeare wrote his first play. He wrote Much Ado About Nothing about the same time the Globe Theatre was built, in 1599. He had written a few comedies before, all having similar features. Much Ado About Nothing and Twelfth Night both end in two marriages, involve disguises, lower-class characters as comic relief and involve courtly love. Other than comedy Shakespeare wrote tragedies, probably more famous than his comedies. They were very different, for example Othello, (some say the tragic re-work of Much Ado About Nothing), involves many deaths, credible villains and hatred. Shakespeare very typically uses two young lovers, the courtly love relationship and another more odd couple. There are lower class individuals adding to the comedy. But Shakespeare didn't just write comedy for the laughs. Many characters symbolise certain things, for example Hero represents innocence. Comedies were also scene as moral messages. In a comedy everything is overcome and it teaches the audience to smite evil. Also it shows the audience that love can come in many different ways and you just have to look for it. An audience of Shakespeare's might have just gone to see Much Ado About Nothing to watch its problems being overcome. The moral message the play portrays is that life is good and love is wherever you find it. It's like a feel-good movie we get nowadays. Shakespeare's comedy were loved a lot more since they seemed to relate to common people a lot more than his tragedies. ...read more.

He also seems to think that when Beatrice callas him in for dinner that she is pretending not to love him. " 'Against my will I am sent to bid you come to dinner' - there's a double meaning in that." It is funny for the audience because he believes that he loves her and can't even realise that she doesn't because he loves her so much. It is comic irony. Another way a director could make Benedick's scene entertaining would be by making him use the whole stage, walking one way when forming his opinion for love of Beatrice and walking another when he summing up the cons of a relationship. This would be entertaining, since he would be constantly moving backwards and forwards, quite suddenly. At the beginning of Act Three there is a very similar incident. Another gulling scene, though this time Ursula and Hero are fooling Beatrice. So by the end of this scene both Beatrice and Benedick believe the other one loves them, and they love each other back, just because they thought they loved each other first. Through this we know it isn't a tragedy because there is once again more love and the fact love came about by some made up rumours for friends trying to entertain themselves. Again Beatrice could hide behind the columns, like Benedick, to add to the physical comedy. This odd couple brought in the comedy. In Twelfth Night there is an odd relationship when Olivia disguised as Cesario serves Lady Olivia who falls in love with her. This odd relationship brings in the comedy through the awkwardness; the comedy in Much Ado About Nothing is more focussed on when their true feelings shine through. As well as the comedy from love and the upper classes we also find the lower classes have their time to shine to in the comic sub-plot. The two main characters in the comic sub-plot are Dogberry and Verges. ...read more.

Of course the audience know that Hero isn't dead and that Leonato will make sure that Claudio will marry Hero. In the final scene, we see Claudio marrying a woman under a veil who he believes to be Beatrice, when in fact it is Hero, "Another Hero!" Also at the end Benedick confront Beatrice about their love, "Do not you love me?" Then they both refuse that they love each other and both realise that they were fooled, "They swore you were almost sick for me." Beatrice then agrees to the marriage. The audience know now that this is definitely a comedy since there are going to be two marriages. Also Don John is captured, Margaret forgiven and then a big dance is performed. Dances were always at the end of Shakespearian comedies to symbolise unity. Another final point is that when Don John is captured he isn't visibly punished; this is because it is a comedy and any form of punishment in Elizabethan times would involve losing a part of the body. So any punishment on stage would make the audience not feel like this is a suitable ending to a comedy. From this a contemporary audience would easily know this is a comedy. The main reason they would believe this is that at the end of a comedy there are marriages and everything is sorted out. If this were a tragedy it would be more likely for Claudio to have killed himself or others, like in Othello. Also the credibility of the villain would make an audience think about the type of play. Unlike this play, in Othello the villain almost persuades the audience he is right. Or in Macbeth, Macbeth is the protagonist and the antagonist. More evidence was the usage of comedy. Dogberry and Verges demonstrated a lot of the physical comedy. Whilst Benedick and Beatrice used verbal comedy. Could you see an Elizabethan theatre going bursting out laughing when Macbeth meets the Witches? Many people of Shakespeare's time would make these connections and therefore realise that Much Ado About Nothing is a comic, not a tragic play. ...read more.